3 November 2014
The future of Iraq hinges on the education of its youth and the preservation of its cultural heritage, the head of the United Nations Educational, Scientific and Cultural Organization (UNESCO) affirmed during an official trip to the war-torn Middle Eastern country.

“Education is a human rights imperative for you and for all Iraq – it is also a development imperative and a security imperative,” Irina Bokova, Director-General of UNESCO, said yesterday during a visit to the Baharka Camp for internally displaced persons (IDPs), near the city of Erbil, in the country’s Kurdistan region.

“Education is a hidden crisis and I have come to stand with you, to support you, to reject the terrible human rights violations you have suffered.”

Since January, some 1.8 million people – half of them children – have been displaced in Iraq, and hundreds of thousands more have been forced to find shelter in unfinished buildings, public spaces and informal settlements. In total, there are 5.2 million Iraqis in need of assistance amid rising instability across the country.

According to UNESCO, as the IDP crisis continues to stretch Iraq’s resources, Iraqi children are increasingly deprived of access to education, potentially jeopardizing their futures. Many Iraqi youths, for instance, were unable to attend the public examinations held in June 2014.

During her visit to Baharka, Ms. Bokova marked the beginning of construction on the camp’s second UNESCO school, slated for completion in December 2014, and one of four UNESCO-backed schools to be built in three IDP camps throughout the country.

She noted that education would provide displaced youth with “a sense of normalcy, stability and hope for the future” and “minimize the risk of vulnerability resulting from violence, abuse or ideological manipulation.”

“We cannot let you and an entire generation of young Iraqis to be deprived of their right to education, because this would throw a shadow over the future of the country as a whole,” the Director-General continued, adding that education was essential to the future stability of Iraq as well as the prospects and rights of Iraqi men and women.

“We must ensure that you learn so you have the chance to become everything you wish,” she added.

Meanwhile, in a ceremony later in the day at the Erbil Citadel, a site recently inscribed on UNESCO’s World Heritage List, the Director-General paid tribute to Iraq’s millennial cultural legacy, handing over the certificate of inscription to Prime Minister of the Kurdistan Regional Government, Nechirvan Barzani.

“Saving the past of Iraq is essential to saving the future of this country and to our collective history,” Ms. Bokova told those gathered. “That is what this inscription means.”

At the same time, she denounced the ongoing attacks against the country’s cultural heritage, warning that Iraq was experiencing “cultural cleaning, cultural eradication and cultural looting.”

Most recently, the Imam Dur shrine in the governorate of Salah-e-Din in Iraq was destroyed by radical elements as part of a widening and unprecedented campaign against Iraq’s cultural, religious, and historical monuments.

“The terrorists are attacking culture because they want to attack the soul of the Iraqi people, to weaken the ground for future reconciliation,” she continued.

“We must stand up against forces that seek to divide Iraq because they attack the humanity we all share.” 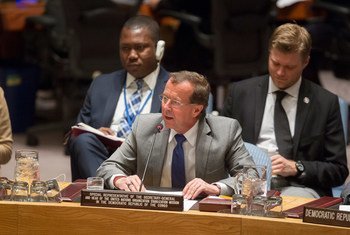 27 October 2014
Amid continuing flare-ups of deadly violence and a tenuous humanitarian situation in the Democratic Republic of the Congo (DRC), the head of the United Nations peacekeeping mission (MONUSCO) in the vast African nation today underlined the need for a “proactive, not reactive” response in countering the country’s rebel groups and boosting protection for civilians.