The international community must aid the world’s landlocked developing countries (LLDC) in pursuing their goals for greater economic development to transition from being landlocked to “landlinked,” Secretary-General Ban Ki-moon advised today, noting that only through comprehensive improvements in trade would such nations be best prepared to tackle the post-2015 agenda.

Speaking at the opening of the Second UN Conference on LLDCs, taking place from 3 to 5 November, in Vienna, Austria, the Secretary-General told more than 1,000 delegates that the world’s new plans to address global challenges “must take account” of conditions in LLDCs.

“We need greater regional integration. This will strengthen trade ties. It will increase economic groupings,” declared Mr. Ban. “Regional integration can transform countries from being landlocked to ‘landlinked.’

There are 32 countries classified as landlocked developing, 16 of which are located in Africa, 10 in Asia, 4 in Europe and 2 in Latin America. Lack of territorial access to the sea, remoteness and isolation from world markets and high transit costs continue to impose serious constraints on their overall socio-economic development.

Eleven years since an action plan for the LLDCs was adopted in Almaty, Kazakhstan, exports have increased and tangible in-roads have been made in improving their share of global trade. But such gains have not been enough to boost the prospects of these countries, many of which are still on the bottom rung of the development ladder.

Notwithstanding a sharp drop in the number of children dying from preventable diseases and an uptick in the number of young girls in school, nine of the 15 countries with the lowest Human Development scores are landlocked.

In his address to the Conference, UN General Assembly President, Sam Kutesa, told delegates they had gathered to “take stock” of the progress made since LLDC states adopted the Programme of Action in Almaty eleven years ago.

“We should feel heartened by the notable progress that has been made in several key areas,” the Assembly President said, highlighting issues such as the harmonization of transport and transit policies and procedures with transit countries, the development of transport infrastructure, and the expansion of trade.

“Export volumes, compared to imports, are still low, and are predominantly raw materials and commodity based. Critical physical infrastructure, such as roads, railways and energy is either lacking or inadequate.”

Citing the Secretary-General’s “sobering assessment” of the state of LLDC’s, Mr. Kutesa also observed that those countries were unable to meet their development objective on their own. In 2012, he stated, the trade volume of LLDCs had been only 61 per cent that of coastal countries while import and export costs were twice as expensive as those of their non-LLDC neighbours.

“With such statistics, it may be an understatement to say that LLDCs are swimming against the tide,” he added.

Mr. Kutesa, a Ugandan national, pointed out that he too was from a landlocked developing country and thus understood the direct importance of infrastructure development, transit and trade facilitation, and policy framework, in order to reduce prohibitive transit costs and enable LLDCs to fully participate in global trade.

“Emphasis must be given to deepening regional cooperation and promoting inter and intra-regional trade. Above all, there must be renewed political will to address transit limitations and other challenges,” he continued, stressing the need for LLDCs in receiving “sustained and unwavering cooperation from transit countries; financial and technical support from bilateral and multilateral partners; and firm commitments from the international community.”

The President of the General Assembly appealed to the gathered delegates to adopt a new Programme of Action at the end of the Vienna conference in an effort to boost the LLDCs competitiveness, stimulate their productive capacities, diversify their exports and “ensure a better future for their 450 million citizens.”

At the same time, in his remarks to the Conference, Gyan Chandra Acharya, the UN High Representative for the Least Developed Countries, Landlocked Developing Countries and Small Island Developing States, called for greater synergy between the LLDC development agenda and the ongoing discussion around the next generation of development goals.

“Let there be a call for actions that match the magnitude of the challenges of being landlocked.”

Later in the day at a high-level roundtable, Secretary-General Ban Ki-moon reiterated the importance of altering the structural outlook of the LLDCs, adding that such transformations made “the difference.”

“With structural transformation, LLDCs can export goods that are low bulk – so they take up less precious transport space or cost – with higher value,” Mr. Ban explained. “That makes good sense all around. It reduces transaction costs – and with the right approach, local production can also benefit the environment.”

In addition, he pointed out, structural transformation also moves goods and workers out of the informal economy and into the markets, creating better jobs, spreading knowledge and promoting competitiveness.

“The UN is here to help LLDCs,” Mr. Ban told the gathering. “We can provide technical assistance, and help design public policies and enable all countries to exchange ideas. We are ready to work with LLDCs as well as donors, development finance institutions, businesses and other partners to achieve structural transformation.”

“The LLDCs can count on the United Nations to transform their geographical disadvantages into platforms for great innovation and progress,” added Mr. Ban. 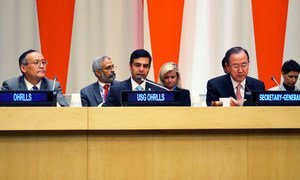