UN Photo/Sylvain Liechti
An armored personnel carrier on patrol near Beni, where the UN Organization Stabilization Mission in the Democratic Republic of the Congo (MONUSCO) is supporting the Congolese National Forces (FARDC) in an operation against the Allied Democratic Forces (ADF) rebel militia. March 2014.
1 November 2014

The head of the United Nations peacekeeping mission in the Democratic Republic of the Congo (DRC) has welcomed the Government's request for more “blue helmets” to backstop Congolese troops fighting to protect civilians from armed rebels that have carried out a spate of attacks in and around the eastern town of Beni over the past month.

“I welcome the request made by President [Joseph] Kabila yesterday morning in Beni asking MONUSCO to strengthen its presence in the region,” said Martin Kobler in a press release, referring to the UN Organization Stabilization Mission in the country by the French acronym by which it is known – MONUSCO.

In addition to the reinforcement of its Intervention Brigade, MONUSCO has already provided support and information to the FARDC regiments currently engaged in fighting against the ADF resources, said the press release.

It further notes that since the recent attacks against civilians in Beni, MONUSCO has increased joint operations with the FARDC, including conducting night patrols.

The UN Mission and its FARDC counterparts had scaled up their readiness and joint activities in the long-restive eastern region of the vast country, as suspected ADF rebels had carried out a series of attacks in Beni town and other villages in and around North Kivu Province.

Since early October, Mr. Kobler has been sounding the alarm on behalf of the civilians in the region who have born the brunt of the violence, including two days ago, when dozens were reportedly killed and injured in an ADF attack in Bango and Kampi ya Chuyi, two villages in the area near Beni.

Briefing the UN Security Council in New York last week on the latest developments, Mr. Kobler underlined the need for a “proactive, not reactive” response in countering the country's rebel groups and boosting protection for civilians.

He noted that despite initial hopes that “the seeds of peace” would spread throughout the DRC's eastern regions, recent outbursts of violence in villages in and around the city of Beni had reminded the world “just how fragile those hopes can be,” referring to a series of attacks committed by ADF rebels between 2 October and 17 October during which they “brutally massacred” over 80 civilians, mostly women and children, with machetes. 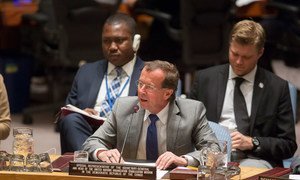 Amid continuing flare-ups of deadly violence and a tenuous humanitarian situation in the Democratic Republic of the Congo (DRC), the head of the United Nations peacekeeping mission (MONUSCO) in the vast African nation today underlined the need for a “proactive, not reactive” response in countering the country’s rebel groups and boosting protection for civilians.