OCHA/Iason Athanasiadis
Displaced persons queue up to receive food supplies at a WFP distribution site in the Kasnazan area of Erbil Governorate, in northern Iraq.
31 October 2014

The Security Council this evening strongly condemned the kidnapping and murder by Islamic State in Iraq and the Levant (ISIL) terrorists of “scores” of Sunni tribesmen whose bodies were found in mass graves in Anbar province, and once again urged the world to unite in a “common effort” to defeat the group and “stamp out” the violence and hatred it espouses.

In a statement to the press issued in New York, the Council deplored the incident and noted that many of these tribesmen had been combating terrorism alongside the Government of Iraq.

News reports suggest that the bodies of more than 200 Sunni Albu Nimr fighters were recovered yesterday from two mass graves. ISIL had reportedly kidnapped some 300 members of the tribe during its recent offensive against the Anbar town of Hit.

“This crime, like the Camp Speicher massacre in Tikrit, once again demonstrated ISIL's brutality, clearly showing that terrorist groups in Iraq target all segments and sects of the Iraqi population,” said the Council, referring to an incident on 12 June 2014, in which ISIL reportedly killed at hundreds of unarmed Iraqi Air Force cadets in an attack on the military Camp.

Expressing “deep outrage” about all Iraqis as well as nationals of other States killed, kidnapped, raped, or tortured by ISIL, as well as its child recruitment, the Council called for the perpetrators to justice, and for the international community, “in accordance with international law, to further strengthen and expand support for the Government of Iraq, including Iraqi Security Forces, in the fight against ISIL and associated armed groups.”

Stressing that all parties, including ISIL and associated armed groups, must abide by international humanitarian law, the Security Council condemned the systematic persecution of individuals from minority populations, such as Yezidis and Christians, and those who refuse its extremist ideology in Iraq by ISIL and associated armed groups. The Council reiterated that widespread or systematic attacks directed against any civilian populations may constitute a crime against humanity.

Further to the statement, the Council stressed the need that those who have committed or are otherwise responsible for violations of international humanitarian law or violations or abuses of human rights in Iraq must be held accountable, noting that some of the acts committed by ISIL and its associates “may constitute war crimes and crimes against humanity”.

“ISIL must be defeated,” the members of the Council declared, calling for a common effort amongst governments and institutions, including those in the region most affected, to counter ISIL, Al-Nusra Front and all other individuals, groups, undertakings and entities associated with Al-Qaida,” in line with relevant UN resolutions. “The intolerance, violence and hatred ISIL espouses must be stamped out,” they added.

The Security Council went on to welcome the appointments of the Defense and Interior Ministers and the swearing-in of the Kurdish Ministers, which completed the formation of an inclusive Government that represents all segments of the Iraqi population and that contributes to finding a viable and sustainable solution to the country's current challenges. 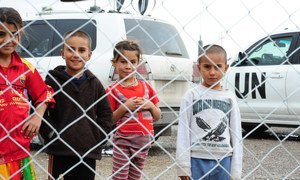 Civilians continue to suffer atrocities and “dramatic” human rights violations at the hands of the Islamic State of Iraq and the Levant (ISIL), warned United Nations Assistant Secretary-General for Human Rights, Mr. Ivan Šimonović, as he concluded his week-long mission to Iraq.