Outraged by the violence directed against civilians in Syria, including the reported dropping of barrel bombs on a displaced persons camp in the war-torn country’s northern region, which killed dozens of people, the Security Council this evening strongly condemned such acts, and reminded all the parties of their international legal obligations to protect civilians.

In a press statement issued at United Nations Headquarters in New York, the Members of the Security Council expressed their deep concern at the continued high level of violence in Syria and condemned all violence directed against civilians.

“They expressed outrage at all attacks against civilians, as well as indiscriminate attacks, including those involving shelling and aerial bombardment, such as the use of barrel bombs, which were reportedly dropped on a displaced persons camp in Idlib governorate on October 29, leaving many dead and injured, including children.”

Through its statement, the Council recalled that all obligations under international humanitarian law must be respected in all circumstances. The 15-member body recalled, in particular, the obligation to distinguish between civilian populations and combatants, and the prohibition against indiscriminate attacks, and attacks against civilians and civilian objects.

The Members of the Council reiterated their call on all parties to immediately implement in full the provisions of Council texts urging an end to the violence, respect for international law, and increased humanitarian access, among other terms, set out in resolutions 2139 (2014) and 2165 (2014), and of the Presidential Statement of 2 October 2013.

“The members of the Security Council reiterated that the only sustainable solution to the current crisis in Syria is through an inclusive and Syrian-led political process with a view to full implementation of the Geneva Communiqué of 30 June 2012,” said the statement, referring to the United Nations-backed six-point plan six-point plan aimed at ending the violence and moving the Syrian parties towards a political settlement. 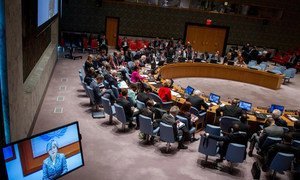