Ebola: UN envoy says response must be sustained ‘until every last case is contained and treated’

The Secretary-General’s Special Envoy for Ebola, David Nabarro, appealed today for the global response to the deadly virus to be sustained “until every last case is contained and treated,” as the United Nations health agency recommended more protective measures for health workers battling the disease on the frontlines of the outbreak.

The UN World Health Organization (WHO) announced it is updating its guidelines of the so-called personal protective equipment (PPE) for healthcare workers to ensure protection of the mouth, nose and eyes from contaminated droplets and fluids.

WHO also said that given that hands are known to transmit pathogens to other parts of the body, as well as to other individuals, hand hygiene and gloves are essential, both to protect the health worker and to prevent transmission to others, and recommended health workers wear double gloves.

At UN Headquarters in New York, Dr. Nabarro gave an update on the wider UN response to the Ebola outbreak, and while noting that there were signs of the strategy working in certain areas, he cautioned against drawing conclusions on the numbers, echoing what WHO concluded earlier this week when it had reported a decline in burials and sickbed occupancy rates, as well as a plateau in lab-reported new cases in Liberia.

Dr. Nabarro said: “Even if we get a reduction in the rate of increase, it does not mean the outbreak is under control…It just means we are on the right path.”

“We need to sustain the effort until every last case is contained and treated,” he said, and press on with the response strategy of community engagement, treatment and contact tracing – “all of which has be to practiced everywhere to prevent an outbreak.”

According to the latest WHO statistics on the Ebola outbreak issued today, 13,567 cases and 4,951 deaths have been reported in the six affected countries of Guinea, Liberia, Mali, Sierra Leone, Spain, and the United States, along with two previously affected countries, Nigeria and Senegal. The cases reported are fewer than those last reported due mainly to suspected cases in Guinea being discarded, WHO said.

“Returning health workers are exceptional people giving for humanity,” he said, appealing to authorities “to think hard” before putting restrictions on them.

The Special Envoy said the Ebola Response Plan of $988 million had received $540 million, or about 50 percent of the total required.

WHO also announced today a new Ebola treatment unit opened on the outskirts of the Liberian capital, Monrovia. This new unit adds another 200 beds to the almost 500 currently available for Ebola patients in the city, which remains the epicentre of the outbreak.

million in commitments and pledges. These funds will be used for the most critical, unfunded priorities of the response.

Meanwhile, the World Food Programme reported that since the start of its operations in April, it had provided food assistance to 1.1 million people in Guinea, Liberia and Sierra Leone and had delivered more than 15,400 metric tons of food.

The UN Children’s Fund (UNICEF), addressing the issues of Ebola preparedness in Cote d’Ivoire and Mali, stressed that prevention was fundamental for the fight against Ebola. UNICEF said it was supporting the media campaign with the view of mobilizing local communities, with the focus being on the west of the country.

A UN Development Programme (UNDP) socio-economic impact study on Guinea has shown that economic growth in the country slowed from 4.5 percent to 2.4 percent. The study also notes a deterioration of poor households' food and nutritional security, postponement of the beginning of the school year and lower attendance rates in health facilities.

Back from West Africa, the United States Ambassador to the United Nations, Samantha Power, noting she was at low risk for contracting the virus because she did not enter an Ebola treatment centre, and she was screened at the airport on arrival into the United States and will monitor her temperature twice a day for 21 days. 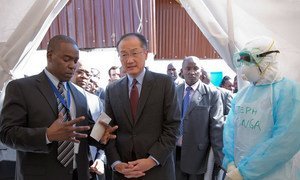 The World Bank has announced it is boosting its efforts in assisting health workers fight the deadly Ebola outbreak in the three most-affected countries in West Africa as part of the wider United Nations Ebola crisis response.