31 October 2014
Fresh fighting in the Central African Republic (CAR) has aggravated the humanitarian situation across the country, UN humanitarian officials warned today, adding that amid the upsurge in violence, aid workers were now facing unprecedented attacks.

At a press briefing held at UN headquarters in Geneva this morning, Jens Laerke, spokesperson for the Office for the Coordination of Humanitarian Affairs (OCHA), said that despite the lack of media interest in the CAR crisis, the displacement of people was still being considered a “massive humanitarian emergency,” with 410,000 people displaced overall.

The flare-up in violence has also heightened the level of insecurity faced by both civilians and humanitarian workers on the ground, Mr. Laerke noted, citing a reported 19 incidents of targeted attacks against aid workers since the beginning of 2014.

Thousands of people are estimated to have been killed in CAR, and 2.2 million need humanitarian aid in a conflict which erupted when mainly Muslim Séléka rebels launched attacks in December 2012. The violence has since taken on increasingly sectarian overtones.

Also addressing the press briefing was a spokesperson for the UN Children’s Fund (UNICEF), Christophe Boulierac, who told reporters that UNICEF is “rushing” critical supplies to thousands of children forced to flee their homes due to the fighting. Across the CAR, Mr. Boulierac said, 2.3 million children were affected by the violence and, in the most recent uptick in fighting in the country’s capital of Bangui, six children had died, including two who were “brutally killed” after being accused of spying.

Against that backdrop, he voiced concern about attacks against humanitarian workers and UN agencies, adding that such attacks had made access to vulnerable populations increasingly problematic. In particular, he pointed to the situation in Bangui which, he said, had put humanitarian access in “jeopardy.”

Nevertheless, he explained that UNICEF had secured the water supply of 55,000 people in the north-west of the country and was setting up 78 new temporary learning spaces for an estimated 15,600 children.

Joining in on the appeals for an end to the violence, UN World Food Programme (WFP) spokesperson, Elisabeth Byrs, meanwhile described the situation on the ground in CAR as becoming “progressively more precarious” and noted that WFP distributions risked being suspended if staff security was threatened.

According to a recent WFP-backed assessment of the food situation in the country, the crisis has caused a sharp deterioration in food security. Food reserves in rural areas were estimated at 40 to 50 per cent lower than average while livestock numbers are currently estimated to have declined by up to 77 per cent. 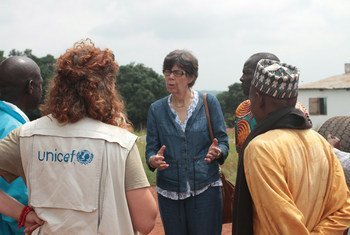