Despite mounting insecurity in border areas between Cameroon and Nigeria, where thousands of Nigerian refugees have sought refuge in the past weeks after fleeing from insurgent attacks, the UN refugee agency said it was stepping up efforts to continue to expedite their transfer.

Speaking at a press briefing in Geneva, William Spindler, a spokesperson for the Office of the UN High Commissioner for Refugees (UNHCR), told reporters that in recent days, insurgent groups in Nigeria had launched repeated cross-border attacks into northern Cameroon, hindering the agency’s efforts to relocate refugees from the border area to Minawao Camp, located some 120 kilometres from the border.

“UNHCR is very concerned about the growing insecurity in areas of the border between Cameroon and Nigeria,” he said, but regardless, “security permitting,” further transfers would continue this week.

Currently, Minawao is hosting 16,282 refugees, with the population having nearly tripled in size in the past two months, Mr. Spindler said. The current camp capacity is estimated at 35,000 people and further expansions are underway to accommodate the refugees already registered for transfer from the border, as well as possible additional new arrivals.

While 1,371 family shelters have been made available to new arrivals, some 9,000 refugees still live in community shelters, the spokesman said. Land has been made available by the Government of Cameroon for further expansion of the site, but the construction of family shelters has been put on hold to allow local and refugee communities to finish harvesting before the land is commissioned, he said.

Meanwhile, civilians in Cameroon were living in a “state of terror” due to frequent insurgent attacks, the spokesperson said, a situation that is being further aggravated because the Nigerian insurgents had reportedly started targeting civilians in Cameroon. Nigerian refugees, who had fled previous attacks by insurgents in north-eastern Nigeria, were asking to be moved away from the border area as soon as possible, he said.

This past Friday, Mr. Spindler said, clashes between insurgents and Cameroonian military forces broke out in the village of Koubougué, on the Cameroonian side, resulting in the deaths of five civilians. Koubougué is located 4 kilometres from the border town of Fotokol, where some 1,000 refugees are awaiting transfer to Minawao Camp.

The spokesman also said that recently arrived refugees reported that access to Cameroon was becoming extremely difficult and dangerous, as insurgents had taken control of several border towns and villages in north-eastern Nigeria, including Gwoza, Bama and Banki in Borno State, Bara in Yobe State, and Michika, Madagali and Gulak in Adamawa State. Refugees were being forced to flee on foot through the bush and cross the Elbeid River before entering Cameroon, he added.

In addition, refugees told UNHCR staff of being pursued by insurgents and witnessing the murders of loved ones. Many refugees were traumatized after having seen such acts being committed, while many families had been separated after fleeing their villages, Mr. Spindler noted.

The ongoing refugee crisis has seen more than 62,000 people spill over into Niger’s Diffa region since the beginning of 2014, while Cameroon is currently hosting some 44,000 Nigerian refugees. According to authorities, another 1,600 have fled to Chad.

Meanwhile, an estimated 650,000 people remain internally displaced in north-eastern Nigeria due to the insurgency.

The operational response to the refugee influx is coordinated by UNHCR in Yaounde at agency level and in the field by the UNHCR office in Maroua. 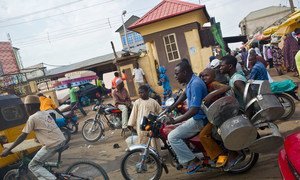 Amid an intensifying campaign of violence committed by insurgent groups in north-eastern Nigeria, the number of refugees fleeing the conflict into the West African country’s neighbouring States has steadily increased significantly, the UN refugee agency warned today.