FAO
A farmer with his livestock at th e Hargeisa Livestock Market in Somaliland.
31 October 2014

Still reeling from a devastating famine which struck the countryside in 2011, Somalia once again sits on the brink of another humanitarian crisis as a poor rainy season followed by severe bouts of floods threaten local harvests, the United Nations agriculture agency warned today.

In a news release underscoring the urgency facing relief efforts, the UN Food and Agriculture Organization (FAO) expressed concern over the fates of more than one million people who are now in critical need of assistance, noting that there has been a 20 per cent increase in just six months in the number of those requiring urgent humanitarian help. In addition, the UN agency observed, two million more people are experiencing threats to their food security.

“If we’ve learned anything from the devastation of the 2011 famine, it’s that early warning signs must lead to immediate action,” Bukar Tijani, FAO Assistant Director-General and Regional Representative for Africa, said.

“We know from experience that quick responses to early warnings are crucial to prevent disaster and are less costly than emergency responses to full-blown humanitarian crisis,” he added.

The FAO explained that much of Somalia’s agriculture takes place along two rivers – the Juba and the Shebelle – which originate in Ethiopia. Experts now fear that the rivers will swell with floodwaters, ruining meagre crop yields caused by a poor rainy season.

As a result of delayed and erratic rainfall, the cereal harvest from July/August is estimated to be 37 per cent below the long-term average and 28 per cent below the five-year average. The poor rains have also contributed to water shortages, poor livestock performance and reduced access to milk in several pastoral areas.

In the last famine to strike Somalia and the wider Horn of Africa region, close to 260,000 people perished, more than half of whom were children. Inadequate humanitarian assistance and poor humanitarian access exacerbated the crisis created by severe drought.

Once again, the UN agency said, FAO finds itself with insufficient resources and will only be able to assist 35,000 families through the support of livestock redistribution, expanded livestock vaccination drives, fishing and agricultural inputs and extended cash-for-work programmes. 22,000 families will also be assisted through a voucher distribution programme aiding them in the purchase of locally-sourced seeds for the upcoming January harvest.

Nevertheless, another $49 million is needed to extend assistance to a total of 58,000 families throughout the first half of 2015.

“We have a small and critical window of opportunity,” said Luca Alinovi, acting Head of Office, FAO Somalia. “We must seize it now if we want to avoid going the same way as four years ago.” 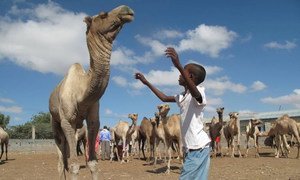 Over one million Somalis in danger as food crisis worsens, warns UN agency

Poor rains, conflict, trade disruptions and reduced humanitarian assistance have led to a worsening of the food security situation across Somalia, the United Nations warned today, adding that acute malnutrition increased in many areas, particularly among children.