The ongoing civil war in Syria and its spillover effects continue to inflict a devastating human and humanitarian toll on neighbouring Iraq, Lebanon and Jordan, a senior United Nations relief official said today, warning that rising numbers of displaced persons, increasing pressure on refugee hosting countries and dwindling international support left the UN “racing against the clock” to meet the needs on the ground.

Describing the Syria crisis and its fallout as “the biggest humanitarian crisis we face today in the world,” John Ging, Operations Director for the UN Office for the Coordination of Humanitarian Affairs (OCHA), who just returned from a week in the sub-region, told reporters at Headquarters that “in fact, it is a disaster for millions and millions of people…which, sadly and tragically, is only getting worse and worse.”

He said the unprecedented numbers of affected people reveal the scale of the unfolding tragedy, with an estimated 200,000 people inside the country killed and 10.8 million people in need of humanitarian assistance. In addition, some 3.2 million people have fled to neighbouring countries and 6.4 million internally displaced. He said further that 2.8 million children are out of school, putting an entire generation at risk.

“As we all know, the crisis in Syria has recently spilled over into Iraq, and here again the numbers speak for the appalling suffering and misery being faced by so many,” said Mr. Ging, noting that some 5.2 million people in Iraq needed humanitarian assistance “and this is still growing.”

Amid these rising needs, the response efforts being undertaken by the UN are chronically underfunded, he said, explaining that the Syria component of OCHA’s appeal for the crisis is $2.28 billion, of which only 38 per cent has been funded. The regional component of the appeal was $3.74 billion, of which just 5.2 per cent had been received; and of the $2.2 billion requested for Iraq, so far, only 27 per cent had been funded.

“The scale of the challenge is enormous and the impact of the shortfall of funding is devastating, particularly now as we [head into] winter,” said Mr. Ging, stressing that the old, the vulnerable and children would suffer most in the coming months. Moreover, most of those fleeing the Syrian conflict are on the run only with the clothes on their backs, “and so they need basic help; blankets, clothes, shoes and of course shelter wherever they end up.”

“We are running against the clock,” because with the winterization efforts under way and the deficit resources, “we simply don’t have the funds,” said, adding that OCHA is appealing again to the international community to realize that absent a political solution to the crisis, “there is obviously devastating human consequence – loss of life and injury – as well as humanitarian consequences. “This does require international solidarity over and above what has been seen thus far.”

Mr. Ging applauded the tremendous generosity shownby Syria's neighbours thus far, but said those countries need “more than words and compliments, they need financial support.” Such support would not only address the needs of the refugees that had fled to those countries but also the rising socio-economic concerns of the countries themselves, for instance, to enhance infrastructure, repair roads, and build more schools.

Responding to questions, Mr. Ging said that every country in the subregion in one way or another is being affected by the crisis in Syria. The situation requires assistance “beyond humanitarian engagement” to deal with the devastating fallout, he said, appealing once again for further progress on the political, track which was the surest way to end the humanitarian crisis.

The neighbouring countries had generously opened their borders “but it’s not enough. This is a burden that must be shared by the entire membership of the United Nations.” How that burden is shared is something that the Member States must work out among themselves, and he called for an immediate scale-up of financial resources. 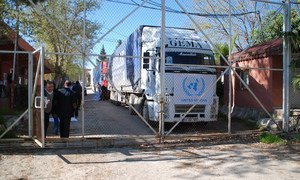