UN Photo/Eskinder Debebe
Under-Secretary-General for Political Affairs Jeffrey Feltman briefs the Security Council at its meeting on the situation in the Middle East, including the Palestinian question.
29 October 2014

Ongoing tensions in East Jerusalem and the West Bank cannot be separated from the larger reality that remains unresolved in the Israeli-Palestinian conflict, a senior United Nations official told the Security Council today.

Briefing the Security Council on the situation in Jerusalem, Jeffrey Feltman, UN Under-Secretary-General for Political Affairs, acknowledged that recent heightened tensions over unilateral actions, provocations and access restrictions at holy sites in Jerusalem are contributing to a volatile situation, and stressed that further delay in negotiations and the pursuit of peace would only serve to deepen divisions and further exacerbate the conflict.

“The status quo is not a viable option,” Mr. Feltman said. “Ignoring the calls from the international community for such negotiations for whatever excuse will only breed more violence in the region that has already seen too much of it.”

In his briefing, Mr. Feltman also said that Secretary-General Ban Ki-moon was “alarmed” by new reports about the advancement of planning for some 1,000 Israeli settlement units in occupied East Jerusalem, including about 400 units in Har Homa and 600 in Ramat Shlomo.

This development follows Israel’s decision at the end of September to accelerate the progress of constructing some 2,600 residential units in Givat Hamatos, also in East Jerusalem.

“The reality is that continued settlement activity in occupied Palestinian territory is doing significant damage to any possibility of a lasting peace between the two sides and is moving the situation ever closer to a one-state reality,” the Under-Secretary-General said.

Noting that some members of the Council had again started discussing the possibility of adopting a new resolution on the Israeli-Palestinian conflict, Mr. Feltman said the Council “might wish to consider if the current paradigm, almost 50 years into the conflict, does not require revisiting our engagement thus far, so as to salvage the decisions of the Security Council and the relentless efforts of the international community, and to ensure that words are translated into actions.

“Palestinian and Israeli leaders and people should make no mistake: there will never be a substitute to their own responsibility in bringing the necessary change and achieving peace,” he concluded. 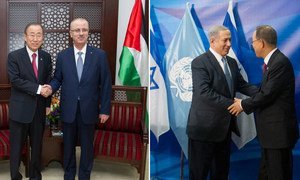