UNICEF/UNI171713/Griggers
Equipped with UNICEF-developed and Government-approved awareness materials, these girls go door-to-door in West Point, Monrovia, to educate their parents, family members and friends about Ebola and how it can be prevented.

29 October 2014
The spread of Ebola in Liberia may be slowing, as demonstrated in the decline in burials and sickbed occupancy rates, as well as a plateau in lab-reported new cases in the West African country hardest hit by the virus, the United Nations World Health Organization (WHO) reported today, while cautioning against drawing premature conclusions.

“It appears the trend is real in Liberia,” Dr. Bruce Aylward, WHO Assistant Director-General in charge of operational response, told a press conference from the agency’s Geneva headquarters. “There may be a slowing of Ebola there.”

But, Dr. Aylward urged caution in interpreting the recent data saying that conclusions should not be drawn that Ebola is under control in Liberia, underscoring that while officials are “seeing glimmers of hope”, they need to study what’s behind the trend.

He stressed that “a slight decline in cases on a day to day basis versus getting this thing closed out is a completely different ball game.”

“Am I hopeful?” Dr. Aylward said. “I am terrified that the information will be misinterpreted. It’s like saying your pet tiger is under control,” he told reporters. “This is a very, very dangerous disease.”

While he reported the freeing up of hospital beds, the plateauing of laboratory-confirmed cases and a decline in burials in Liberia, he noted that Ebola is “burning hot” in parts of Sierra Leone, another country at the frontlines of the outbreak, along with Guinea.

The WHO doctor said there was evidence that Ebola-affected countries can control the epidemic with safe burial, education, engagement, treatment work at a large scale, “but they need help.”

WHO, in its latest update on Ebola issued Wednesday, said 13,703 cases and 4,922 deaths had been reported as of 27 October in the six affected countries of Guinea, Liberia, Mali, Sierra Leone, Spain, and the United States, along with two previously affected countries, Nigeria and Senegal. A total of 521 health-care workers are known to have been infected with Ebola, 272 of whom have died, according to the update.

Fifteen countries that neighbour States with widespread and intense transmission, or that otherwise have strong trade and travel ties with hard-hit countries, will be prioritized for technical assistance on preparedness from specialist WHO teams and partners. WHO identified these countries as: Benin, Burkina Faso, Cameroon, Central African Republic, Cote D’Ivoire, Democratic Republic of Congo, Gambia, Ghana, Guinea Bissau, Mali, Mauritania, Nigeria, Senegal, South Sudan, and Togo. 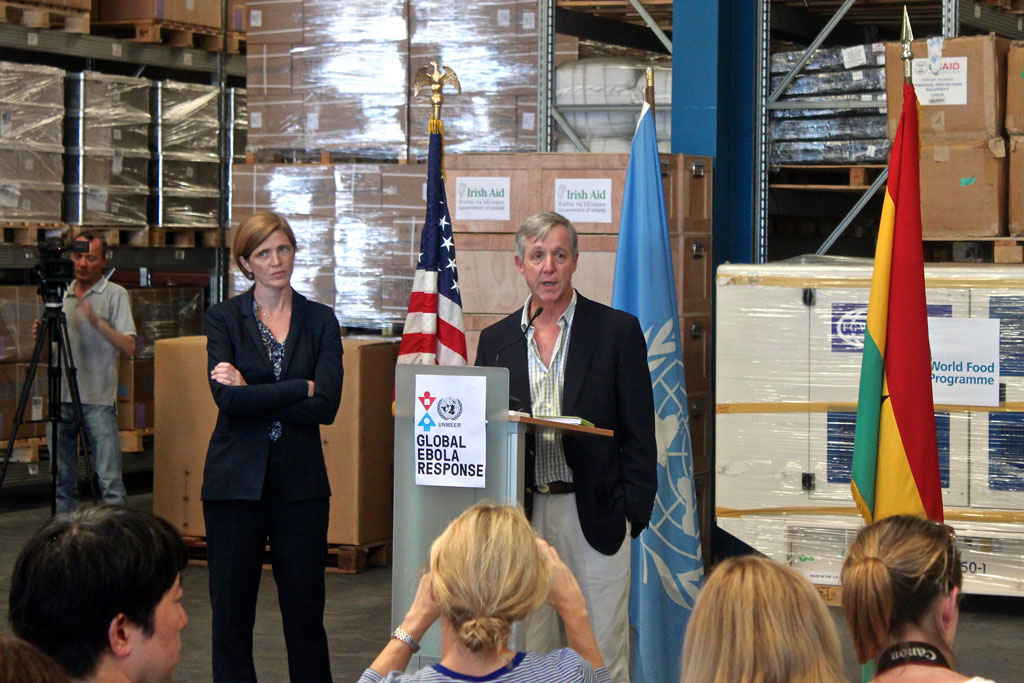 Head of UNMEER Anthony Banbury and Ambassador Samantha Power (USA) hold a joint press conference on the latest developments in the response to the Ebola crisis. Photo: Aaron J. Buckley/UNMEER

Mr. Banbury said that there's been a very significant mobilization of international personnel, resources and capabilities to work side-by-side with the governments, and that those efforts are starting to pay off.

With that vital imperative, Mr. Banbury said the Mission is working very hard together with partners such as the United States, all the wider UN family, non-governmental organizations and national governments “to make sure we put that response capability in place everywhere to that there are no gaps in the response.”

“If we can do that, we can turn this crisis around,” he said. “That's our objective – we're working very hard to achieve it and I'm confident that with all of the international community working with the national governments, we'll make it.”

Ms. Power told reporters she was very encouraged by the steps taken in dealing with the Ebola crisis and that her main message was for the world to fill the gaps so “we can bend and end the curve.”

Meanwhile, the UN World Food Programme (WFP) warned today that Guinea is facing growing food insecurity due to the current Ebola crisis. Forest Guinea – the area of Guinea hardest hit by the virus – is experiencing the worst rates of food insecurity in the country.

WHO also noted today that as the Ebola outbreak grows and spreads in Sierra Leone, a small but significant group of people is also growing: the Ebola survivors, and psychological and social services for survivors are gradually emerging in that country. 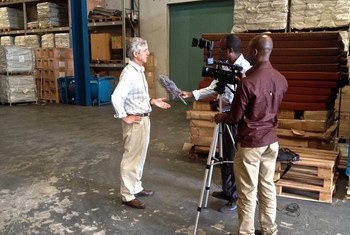 27 October 2014
The head of the United Nations Mission for Ebola Emergency Response (UNMEER) has wrapped up his visits to the three West African countries battling the Ebola outbreak as part of the Organization’s ongoing efforts to drum up international support in tackling the deadly crisis, it was announced today.