As the United Nations ramps up its reconstruction efforts of war-ravaged Gaza, Nobel Peace Prize Laureate, Malala Yousafzai, has announced a contribution of $50,000 to help with the rebuilding of UN schools heavily damaged during the recent fighting in the enclave.

According to a news statement released today by the UN Relief and Works Agency for Palestine Refugees in the Near East (UNRWA), Ms. Yousafzai made the announcement as she accepted the prestigious World Children's Prize in Stockholm, Sweden, commending UNRWA's “heroic work” in helping the Palestinian children and noting that the needs in the Palestinian territory were “overwhelming.”

“We must all work to ensure Palestinian boys and girls, and all children everywhere, receive a quality education in a safe environment. Because without education, there will never be peace.” Ms. Yousafzai said.

The Nobel Laureate noted that the $50,000 donation would help towards the rebuilding of the 65 schools damaged during the recent 51-day conflict which saw entire neighbourhoods flattened and almost one-third of Gaza's population uprooted.

The violence killed more than 2,100 Palestinians, including more than 500 children, and more than 70 Israelis.

UNRWA Commissioner General Pierre Krähenbühl commended the donation, saying the UN was “deeply touched” by the gesture and that it would “lift the spirits” of a quarter of a million UNRWA students and “boost the morale” of the more than 9,000 teaching staff there. In addition, he praised Ms. Yousafzai for her personal courage and her role as “a symbol of the boundless potential that lies within each and every child on Earth.”

“UNRWA shares with you the profound belief in the importance of education as a means to lift young girls and boys out of isolation, exclusion or oppression,” Mr. Krähenbühl continued.

“Acquiring skills and knowledge to improve prospects for the future is profoundly engrained in the Palestinian consciousness.”

Following the devastation wrought by the conflict, UNRWA announced it is providing food, water and sanitation services to over 40,000 displaced people in 18 of its installations, psycho-social support particularly for children, cash grants to the homeless for rent, as well as urgent repairs to a total of 118 UNRWA installations. 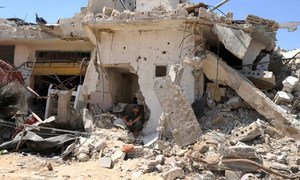 A week after a major conference in Cairo on the reconstruction of war-ravaged Gaza, and in the wake of recent visits to Gaza by the Palestinian Prime Minister, Rami Hamdallah and United Nations Secretary General, Ban Ki-moon, the key UN agency on the ground there has begun scaling up its response to meet critical needs of people in the Strip.