UNHCR/M. Hofer
A Syrian refugee mother waits in line with her child to collect aid in Arsal, Lebanon.

28 October 2014
Lebanon remains “a beacon of tolerance and co-existence” in an otherwise combustible region, Secretary-General Ban Ki-moon declared today, adding that in the face of growing challenges along its borders, the Middle Eastern country will need to continue its close collaboration with the United Nations and other international stakeholders.

In a message delivered to a meeting of the International Support Group for Lebanon, held in Berlin, Germany, Mr. Ban celebrated the unity of the Group in support of Lebanon’s stability, stating that it sent “a strong signal” and complemented the progress reflected in the present Government.

He noted, however, that the Group had expressed concern about “the severe and growing challenges” facing the country as a result of the ongoing conflict in Syria and that pressure on Lebanon’s border, including recent attacks on the Lebanese army in Tripoli, had “further highlighted the threat.”

“The Group has consistently highlighted Lebanon’s need for international assistance for the Lebanese Armed Forces; for Syrian refugees and the communities hosting them; and for affected government programmes,” the Secretary-General said in a message delivered by Derek Plumbly, the UN Special Coordinator for Lebanon.

“I understand certain anxieties about the scale of the Syrian refugee presence, and note the tensions in some communities. I also note recent policy decisions announced by the Government,” he continued, while also stressing the importance of “close cooperation between the Government and UNHCR [Office of the UN High Commissioner for Refugees] in managing the refugee presence effectively and in accordance with international humanitarian standards and human rights.”

As the conflict in Syria enters its fourth year, the Office of the UN High Commissioner for Refugees (UNHCR) has registered over 1,000,000 Syrian refugees in Lebanon – now constituting an estimated 25 per cent of the total population.

“Lebanon is a beacon of tolerance and co-existence in the region,” Mr. Ban concluded. “Easing the situation imposed by a crisis now in its fourth year is essential to Lebanon’s continued stability.”

Cessation of hostilities holding in Lebanon, reports UN Force as it works on de-mining 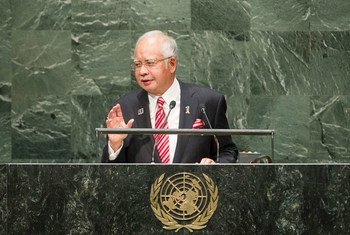 26 September 2014
At the General Assembly today, Prime Minister of Malaysia, Mohd Najib Tun Abdul Razak paid tribute to both MH370 and MH17 flights – “twin tragedies” – that will hopefully change the global aviation system for the better.