The Director-General of the United Nations Educational, Scientific and Cultural Organization (UNESCO) strongly condemned the destruction of the Imam Dur shrine in the governorate of Salah-e-Din in Iraq, and called for an end to such acts of “cultural cleansing.”

“Such acts are war crimes,” said Irina Bokova, noting in a press release that the destruction of the Imam Dur Mausoleum is not an isolated case.

“The cultural cleansing underway in Iraq must stop. The persecution of ethnic and religious minorities, combined with the systematic destruction of some of the most iconic representations of Iraq’s rich and diverse heritage, testifies to an ideology of hatred and exclusion,” she added.

Hailing the shrine – which was built during the eleventh century A.D. – as one of the emblematic representations of Islamic architecture of its time, the Director-General said that the perpetrators must be held accountable for their actions.

Ms. Bokova lamented that the intentional targeting and systematic destruction of cultural heritage in Iraq was reaching unprecedented levels. “Over the past months, we have witnessed similar attacks on historical buildings, in particular mosques, churches and shrines,” she noted.

“UNESCO stands by all Iraqis in their efforts to safeguard their heritage, a heritage for mankind,” she added. 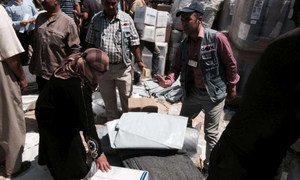 As United Nations humanitarian agencies and partners are extending aid to hundreds of thousands of families on the run in northern Iraq from armed militants, a senior UN official is calling for an immediate stop to what she termed an “emerging cultural cleansing.”