Speaking during the inauguration ceremony, Mr. Ban hailed the opening of the facility as “a milestone for the United Nations and for its already close partnership with Ethiopia and with people across Africa.” He stressed that “being together under one roof means common services, economies of scale and the harmonization of our operations.”

With the addition of the new facility, the Economic Commission for Africa becomes the third-largest UN duty station in terms of building portfolio, following New York and Geneva.

In his statement, the Secretary-General also commended the progress being made in Africa, and attributed much of that success to the work done at the Economic Commission for Africa.

“This is a time of multiple crises – but also one of great opportunity,” he said. “It is also a crucial time for Africa, when great progress is being made in many ways,” he added.

Following the visit to the new facility, the Secretary-General continued his trip throughout the Horn of Africa with a stop in Djibouti to celebrate United Nations Day.

Noting that Djibouti has always been a “crossroads of cultures,” he said that the UN is helping to forge a global response to terrorism in Djibouti and other countries in the region, as well as forging ahead to meet the Millennium Development Goals and adopt a new agenda for sustainable development. Meeting these targets will have a major impact on Djibouti, he noted, as people there “deserve an international response.”

While in Djibouti, the Secretary-General also met with Prime Minister Abdoulkader Kamil Mohamed and National Assembly Speaker Idriss Arnaoud Ali. Among the topics discussed were food security and development, as well as peace and security issues in the country and the wider Horn of Africa.

Mr. Ban stressed that policies and actions to support the safe and voluntary return of refugees residing in or transiting through Djibouti should be explored, while ensuring that their human rights are fully respected.

On the issue of counter-terrorism, the Secretary-General informed the Prime Minister of the role of the UN Counter-Terrorism Centre, and encouraged Djibouti to explore the range of UN assistance, including capacity-building and technical advice and expertise.

The leaders also discussed the Ebola epidemic and the need to boost international support and assistance, including from Djibouti, to affected countries in West Africa. They welcomed the positive steps taken by the African Union to mobilize human and other resources to curb the spread of the epidemic.

The Secretary-General’s visit to the Horn of Africa is part of a joint trip uniting the capacities of the United Nations, World Bank, European Union, Islamic Development Bank, and African Development Bank.

♦ Receive daily updates directly in your inbox - Subscribe here to a topic.
♦ Download the UN News app for your iOS or Android devices.
Economic Commission for Africa 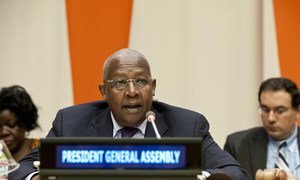 While many African countries and communities have made great progress in peace and security, human rights, good governance and the rule of law, more remains to be done, several senior United Nations said during a high-level panel discussion assessing the continent’s development.