Ahmed Shaheed, Special Rapporteur on the situation of human rights in Iran, spoke to reporters in New York ahead of the presentation of his latest report to the General Assembly committee dealing with human rights issues (Third Committee) tomorrow.

“The main concerns in my report deal with issues of right to life,” he stated, adding that he has observed a “surge” in executions in the country in the past 12 to 15 months.

At least 852 individuals were reportedly executed between July 2013 and June 2014, representing an “alarming” increase in the number of executions in relation to the already-high rates of previous years, he wrote in his report.

“The Government also continues to execute juvenile offenders,” he added. “In 2014 alone, eight individuals believed to be under 18 years of age at the time of their alleged crimes were reportedly executed.”

Mr. Shaheed also noted a “widening of the range of offenses” for which people are put to death, including economic crimes and what are clearly political activities.

As pointed out in the report, the new Islamic Penal Code that entered into force in 2013 now omits references to apostasy, witchcraft and heresy, but continues to allow for juvenile executions and retains the death penalty for activities that do not constitute most serious crimes in line with the safeguards guaranteeing protection of the rights of those facing the death penalty such as adultery, repeated alcohol use, and drug possession and trafficking.

The expert said he was “shocked” by the execution over the weekend of Reyhaneh Jabbari, a young woman who was hanged in a Tehran prison for killing a man she said was trying to sexually abuse her.

Mr. Shaheed had raised his concerns about Ms. Jabbari’s trial with the Government on several occasions but had not received satisfactory replies.

He also cited concerns about the rights of lawyers; the right to expression, association and assembly; and extensive measures taken by the Government to restrict access to information.

Religious persecution also remains a concern, he said, noting that there are at least 300 people in detention for their religious practices.

“Of increasing concern to me is the worsening situation of women in the country,” Mr. Shaheed added, noting that, among other things, the number of women enrolled in university has decreased from 62 per cent to 48 per cent over a two-year period. Other concerns include the lack of opportunities for women in the workplace, as well as wage disparities.

Early and forced marriages are another major concern, the expert said. The legal age of marriage for girls in the country is 13 years, but girls as young as 9 years of age may be married with permission from a court.

The number of registered divorces for girls under 15 years of age has also consistently increased since 2010, the report added. The Government has responded by stating that the law prohibits forced marriage, meaning that all marriages in the country are consensual.

Mr. Shaheed has not been allowed entry into Iran since he took up his post in 2011. He has prepared his reports based on numerous official Government sources, interviews with Iranians both inside and outside the country and reports sent to him by credible human rights organizations. 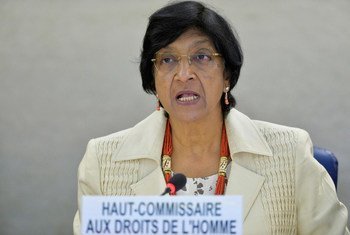 26 June 2014
The United Nations human rights chief today called on authorities in Iran to halt the imminent execution of a juvenile offender, while also voicing concern about the excessive use of the death penalty in the country since the start of the year.