UNHCR/E. Ziyatdinova
A Ukrainian mother with her daughter and young friend in the room where she lives with her family at a centre for displaced people in Slavyansk.

In his briefing to the Council, Assistant Secretary-General for Political Affairs, Oscar Fernández-Taranco, noted that despite a tenuous ceasefire, the results of efforts to end the continuing conflict between Government forces and separatists from Ukraine’s East remain “mixed” ahead of the country’s imminent parliamentary elections scheduled to be held for 26 October and 7 December.

The “continued violation of the cease-fire agreement is a daily occurrence, with the regular loss of life,” Mr. Fernández-Taranco said, citing “deeply disturbing reports” on the alleged use of internationally-banned cluster bombs in 12 specific incidents where at least six people were killed and dozens of others wounded.

“Such heinous practices, if confirmed, are utterly unacceptable. The reports should be urgently and fully investigated and those found to be responsible should be held accountable. These serious allegations serve as a stark reminder of the necessity to urgently implement all 12 parts of the Minsk Protocol,” he continued, referring to the agreement signed in the Belarussian capital by representatives of the Russian Federation, Ukraine and opposition groups.

Nevertheless, Mr. Fernández-Taranco voiced hope that the upcoming elections could serve as a turning point in the crisis and as “milestones in the efforts to stabilise the country.” Once carried out, he added, the elections would need to be followed by the “rapid implementation” of a comprehensive national dialogue coupled with a series of political, legal and economic reforms.

“We cannot and should not allow eastern Ukraine to become just the latest in a string of ‘frozen conflicts’ in Europe,” he concluded.

The conflict in Ukraine is Europe’s most recent and pressing political crisis as the country has become entangled in a knot of numerous regional and global interests.

Tensions in Ukraine came to a head after months of political unrest led to the ouster of President Viktor Yanukovych in February. This was followed by increased political pressures in the country’s autonomous region of Crimea, where Russian military were subsequently deployed and a secession referendum was held in mid-March, in which the majority of the region’s people voted to join Russia.

By mid-April, hostilities flared in eastern Ukraine as Luhansk, Kharkiv, Donetsk and at least 5 other cities in the region were targeted by uprisings and the violent takeover of Government buildings. And in the city of Slovyansk, where the police station was seized, self-declared separatist groups reportedly demanded a referendum similar to the poll held in Crimea.

Despite the continuing attempts to broker a peace, Assistant Secretary-General for Human Rights, Mr. Ivan Šimonović, voiced concern over the growing military and civilian casualties, telling the 15-member Council that residential areas in Ukraine’s restive Eastern regions were the subject of indiscriminate shelling. At the same time, he observed, armed groups “continue to terrorise the population” through abductions, killings, torture and other serious human rights abuses.

He drew attention to what he described as “a worrying new tendency” in Crimea where there were an increasing number of cases of enforced disappearances, including the abduction of four Crimean Tatar men, one of whom was recently found dead.

Mr. Šimonović also warned that the humanitarian situation in areas controlled by the armed groups remained “precarious,” particularly in the Luhansk region, with many people deprived of regular access to water and electricity and with limited access to healthcare and educational services.

Overall, he said, the number of internally displaced persons had reached a peak of 430,059 as civilians continued to flee the areas of conflict. As winter sets in, he added, they risked worsening living conditions.

The Assistant Secretary-General for Human Rights informed the Council that he was particularly concerned about the “ever-deepening” political divide as Ukrainian nationalists associated with the Right Sector party committed acts that “exacerbate tensions between the communities,” such as the removal of Lenin statues and the persecution of politicians associated with the former ‘Party of Regions.’

Looking forward, Mr. Šimonović warned that Ukraine remained on the cusp of an enduring crisis, but added that adherence to the 5 September Minsk Protocol offered a glimmer of hope for peace.

“Human rights violations and violations of international humanitarian law continue to be committed. There is a clear threat that we may be facing yet another protracted low-intensity conflict. Nonetheless, the 5 September ceasefire agreement still presents the most significant opportunity for a peaceful solution to the situation in the East,” he said.

“I firmly believe that the 12-point Minsk Protocol has its best chances of holding if it is implemented in line with human rights standards.” 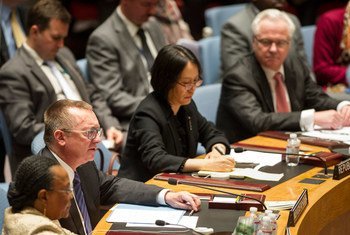 30 April 2014
Describing “alarming” developments in Ukraine – from the capture of European observers and the violent takeover of Government buildings by separatist groups, to the shooting of the mayor of a major eastern city – a senior United Nations official this evening appealed to all sides to “work expeditiously” at putting the crisis-torn country on the path to stability.