WHO/M. Missioneiro
Clinical trials of this candidate Ebola vaccine will take place in the US, Germany, Gabon and Kenya.
24 October 2014

The United Nations World Health Organization (WHO) has convened a meeting with top Government officials from Ebola-affected countries, regulatory agencies, vaccine manufacturers and funding agencies to discuss and agree how best to best fast-track testing and the deployment of vaccines in sufficient numbers to halt the spread of the deadly virus.

WHO said today that these vaccines are expected to have a major impact on further evolution of the epidemic, with trials already underway in the United States and soon to begin in Africa, Germany and Switzerland to determine safety, dosing and efficacy.

Participants at yesterday’s meeting agreed that the results from phase 1 clinical trials of most advanced vaccines are expected to be available in December 2014. Efficacy trials in accepted countries also will begin in this timeframe.

“As a group, we are accelerating in a matter of weeks a process that typically takes years, ensuring that safety and effectiveness remain the top priorities with production speed and capacity a close third,” says Marie-Paule Kieny, WHO assistant director general of health systems and innovation.

Meanwhile, pharmaceutical companies developing the vaccines committed to ramp up production capacity for millions of doses to be available in 2015, with 100,000 ready in the first half of the year. Regulatory authorities in countries where the vaccines are manufactured and in Africa are under extremely short deadlines to have vaccines approved.

Community engagement is also vital and work should be scaled up urgently in partnership between local communities, national governments, nongovernmental organizations and international organizations, WHO said.

Speaking to journalists in Geneva this morning, Mr. Fadéla Chaib, also for the WHO, confirmed the first Ebola case in Mali.

A two-year old girl fell sick on 20 October in Kayes, 600 km away from Bamako. Mr. Chaib said the little girl has since been transferred to a hospital after her treatment in a paediatric centre on 21 October. She had been had been travelling with her grandmother to Guinea.

Local authorities have identified 43 persons who had been in contact with the little girl and her grandmother, including 10 health care personnel who had taken care of the girl in the paediatric centre before her transfer to the hospital. Those contacts were under control and the paediatric centre had been disinfected.

On 19 October, WHO deployed a team to Mali and Côte d’Ivoire in order to prevent the spread of Ebola in the neighbouring countries. In the next 24 hours, WHO will send reinforcements to its team on the ground to help strengthen the local health care system.

Several other UN agencies and partners continue to deliver much-need assistance to the affected countries, including United Nations Children’s Fund (UNICEF) who with its flights scheduled to arrive in Monrovia today and on 27 October, is delivering 5,976 Ebola protection kits - buckets, soap, gloves and garbage bags, as well as pharmaceuticals items.

UNICEF also increased its stock of body bags, bringing the number to 20,000 for adults and nearly 5,000 for children.

Also speaking to reporters in Geneva, a UN World Food Programme (WFP) spokesperson noted that if the Ebola epidemic lasts another 4-5 months, the 2015 harvest in the affected countries will be affected.

Elisabeth Byrs said that in October, WFP in Guinea distributed supplies to 186,000 people in areas of widespread and intense transmission across the country. The previous week in Liberia, WFP had distributed 2,430 metric tons of food to about 144,600 people in eight counties. WFP had also increased its October distribution target in the country by 35 percent and aimed to reach 270,000 people this month.

In Sierra Leone, WFP had started constructing Forward Logistics Bases in Port Loko, Makeni and Kenema. The required equipment for the establishment of the bases had arrived in the country.

More funds are urgently needed, however, to keep the assistance coming. Ms. Byrs specified that the WFP’s current Emergency Operation had a total requirement of almost $93 million with a funding shortfall of 48 per cent.

For its Special Logistics Operation, WFP still required 87 percent of the $87 million. Jens Laerke, for the Office for the Coordination of Humanitarian Affairs (OCHA), specified that out of the total requested $988 million needed for the overall Ebola response, $488 million had been provided thus far.

Meanwhile at Headquarters in New York, Secretary-General Ban Ki-moon hosted a global Town Hall this morning to brief staff members on measures being taken to protect them from Ebola.

The UN message must be based on facts and evidence conveying a sense of urgency without inciting panic, Mr. Ban stressed.

In other news, the head of the UN Mission for Ebola Emergency Response (UNMEER) today wrapped up his visits to the three West African countries battling the Ebola outbreak as part of the Organization’s ongoing efforts to drum up international support in tackling the deadly crisis.

Speaking to the press in the Liberian capital, Monrovia, Anthony Banbury said it was clear that the governments had plans in place in each of the countries and that much good work had been done by those Governments and their partners, “but as a ‘crisis manager’, it’s always necessary to have a clear understanding of what needs to be done, what are the resources to do it, and are the resources coming online.”

So, following what he called a “gap analysis” in Accra last weekend, he had immediately begun another round of consultations with the Governments of hard-hit Guinea, Sierra Leone and Liberia on how UNMEER could be most helpful. “I also wanted to have a sense of how things were going in a country…It is important we are always in a learning mode so that we can adjust our operations where appropriate.”

In Liberia – his second visit to the country since being named UNMEER chief – he had visited Tubmanberg, a town north-west of Monrovia to see the Ebola treatment unit being built by the Armed Forces of Libera (AFL) with the support of United States military. Praising the dedicated and speedy work of the AFL, Mr. Banbury said the facility was nearly complete and that medical staff were shortly expected to arrive to begin start oup procedures there.

Nevertheless, he said, there are “very, very serious challenges ahead of us [and] we need to work very hard to get them under control although we are seeing some areas where the level of crisis is lessoning, which is incredibly encouraging.”

Indeed, he said that as he walked around the town, he saw that “normal life is continuing in Monrovia for a lot of people.” Yet for others, “it is a terrible crisis and we have to work really hard to get that crisis under control and to allow all Liberians and all the people of this region and indeed the world to live their lives without fear that Ebola will cause any member of their family to fall ill.”

Addressing the press alongside Peter Jan Graaff,Ebola Crisis Manager for Liberia, and Richard Ragan, Director of Operations, Mr. Banbury explained that UNMEER had one priority: to support Government effort to stop Ebola as quickly as possible. “We are working on this very, very hard together with others and …working together we are going to get this job done, hopefully sooner rather than later. The crisis will end and Liberia will continue to be able to build the society it wants to build.” 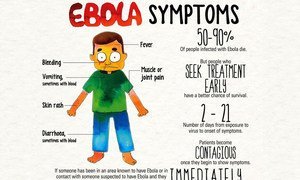 As the international community mobilizes on all fronts to combat the unfolding Ebola outbreak, the primary emphasis must continue to be on stopping the transmission of the virus within Guinea, Liberia and Sierra Leone, the three hardest-hit countries, United Nations World Health Organization (WHO) experts said today.