As winter closes in, UN launches humanitarian appeal for Iraqis in need

OCHA/Iason Athanasiadis
Displaced persons queue up to receive food supplies at a WFP distribution site in the Kasnazan area of Erbil Governorate, in northern Iraq.
23 October 2014

An estimated 2.8 million Iraqis lack food assistance while another 800,000 are in urgent need of emergency shelter, the United Nations Office for the Coordination of Humanitarian Affairs (OCHA) warned today as it launched an appeal for greater financial support to bolster its operations on the ground.

In recent months, Iraq has been increasingly riven by conflict, terrorism and a swelling refugee crisis contributing to the Middle Eastern country’s deteriorating humanitarian situation. Neill Wright, OCHA’s acting Humanitarian Coordinator for Iraq, cautioned that the needs of some 5.2 million affected Iraqis had now become “immense” and urged the international community to step up its efforts through a $2.2 billion appeal envisioned in its updated Strategic Response Plan (SRP).

“Although much has been done, much more is needed in the coming weeks to prevent additional, unnecessary suffering for many Iraqis,” Mr. Wright said in a press release.

“This effort requires all of us – the UN, non-governmental organizations, civil society and the private sector – to work together. All of us have a role to play.”

Iraq has been convulsed by increasing instability over the past several months amid an ongoing offensive by the Islamic State in Iraq and the Levant (ISIL), unleashing wave after wave of internally displaced persons and refugees.

Just last week, an ISIL offensive against the Iraqi town of Hit prompted an estimated 180,000 people to flee the violence. According to the Office of the UN High Commissioner for Refugees (UNHCR), many of those displaced were now sheltering with relatives and friends as well as in schools, mosques and public shelters already overwhelmed by Iraq’s mounting population of displaced persons.

At the same time, the agency warned, tens of thousands of Syrian refugees escaping the ISIL onslaught on the Syrian border town of Kobane were expected to cross into Iraq from Turkey, citing civil unrest, the high cost of living, difficulties with aid, and the desire to join family members already living in the Kurdistan region of Iraq among their reasons for entering the country. They join the estimated 1.8 million citizens internally displaced throughout the country in 2014 alone.

In its latest appeal, OCHA also noted that with the onset of winter, 1.26 million people remain in dire need of some form of winterisation assistance, such as warm clothes, shoes, health services, and food. 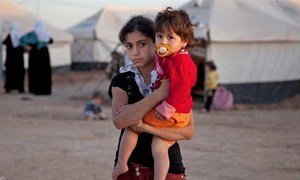 With Iraq soon expecting heavy winter rains and sub-zero temperatures, efforts to provide hundreds of thousands of internally displaced persons in the Middle Eastern country with the necessary protections are already being implemented, an official with the United Nations Office for the Coordination of Humanitarian Affairs (OCHA) has declared, adding that while much is being done, a more comprehensive approach would be required.