Secretary -General Ban Ki-moon has condemned last week’s decision by the Democratic Republic of the Congo (DRC) to expel from the country its top United Nations human rights official, saying that doing so can “only be harmful for the country’s progress” and urged the Government to reconsider its position.

“By impeding the United Nations human rights work, the Government is failing to uphold its obligations. Doing so can only be harmful for the country’s progress,” said Mr. Ban, according to astatementreleased by the Secretary-General’s spokesperson today.

Respect for human rights is “absolutely essential” for long-term peace and stability in the DRC, Mr. Ban added, expressing deep concern for recent threats made against other staff of the Joint Office, in connection with their human rights work.

The decision to declare Scott Campbell, the director of the UN Joint Human Rights Office (UNJHRO), persona non grata, or “unwelcome person”, was initially made public by the Ministry of the Interior on Thursday, a day after the release of a UN report detailing serious human rights violations by Congolese security forces, for which the Ministry is responsible.

The decision was officially confirmed by the Ministry of Foreign Affairs on Friday, despite a concerted effort by Martin Kobler, the Head of the UN mission in DRC (MONUSCO), which compiled the report jointly with the UN Human Rights Office (OHCHR), to persuade the Government to reconsider its decision.

The UN chief today recalled how the Congolese people have suffered grave human rights violations. The Joint Office has, over the years, helped to document those crimes as it sought to promote and protect their rights, while strengthening justice and accountability.

In keeping with the Human Rights Up Front Initiative – which seeks to prevent genocide and human rights violations– the Secretary-General reiterated that UN staff “must never be threatened or sanctioned for doing their work”. Their work in the country is based on the United Nations Charter and, in this instance, mandated by the Security Council.

Expressing his full confidence in Mr. Campbell, the UN chief urged the Government of the DRC to reconsider its position on the expulsion and to take urgent action to address the threats against other staff.

On Sunday, the UN High Commissioner for Human Rights, Zeid Ra'ad Al Hussein, also condemned the decision to order his top official in the country to leave within 48 hours and called for the threats against other human rights staff to end.

“Not only has my highly experienced and respected representative in DRC, Scott Campbell, been told to leave, but two other staff working in his team have been seriously threatened in recent days. This is unacceptable,” declared Mr. Zeid inpress release.

According to the UN human rights office (OHCHR), Mr. Campbell left the DRC on Friday for long planned holidays. 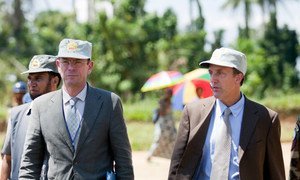 The UN High Commissioner for Human Rights, Zeid Ra'ad Al Hussein, said today that he “regrets and condemns” the decision of the Government of the Democratic Republic of the Congo (DRC) to order his top official in the country to leave within 48 hours, and the serious intimidation aimed at other human rights staff in there.