20 October 2014
The city of Detroit must restore access to water for its citizens who remain unable to pay their bills, two United Nations experts urged today, adding that a failure to do so would be a violation of the most basic human rights of those residents.

Catarina de Albuquerque, the Special Rapporteur on the human right to water and sanitation, and Leilani Farha, the Special Rapporteur on the right to adequate housing, both expressed concern regarding the “unprecedented scale” of water shut-offs taking place in the United States city of Detroit where, they said, the “most vulnerable and poorest” of the city’s population were being disproportionately affected, including a predominant number of African Americans.

“It is contrary to human rights to disconnect water from people who simply do not have the means to pay their bills,” said Ms. de Albuquerque in a press release at the end of the experts’ two-day visit to the city.

“I heard testimonies from poor, African American residents of Detroit who were forced to make impossible choices – to pay the water bill or to pay their rent.”

The Detroit Water and Sewerage Department has for months been disconnecting water services from households which have not paid bills for two months, and has sped up the process since early June, with the number of disconnections rising to around 3,000 customers per week. As a result, some 27,000 households have had their water services disconnected so far this year.

The news release pointed out that due to high poverty and unemployment rates, relatively expensive water bills in Detroit are unaffordable for a significant portion of the population. In addition, the experts noted, repeated cases of gross errors on water bills have been reported which are also used as a ground for disconnections.

For her part, Ms. Farha voiced alarm at testimonies of people stating that they had been charged from the Detroit Water and Sewerage Department’s “infrastructure deficiencies,” including leakages, as well as the utility’s “lack of competence in dealing with errors in billing or requests for assistance.” Moreover, many residents were not provided with advance warning before their water was shut off and were left without any possibility for administrative recourse.

“In practice, people have no means to prove the errors and hence the bills are impossible to challenge,” Ms. de Albuquerque declared, adding that “the indignity suffered by people whose water was disconnected is unacceptable.”

In particular, Ms. de Albuquerque cited the case of a woman whose water had been cut and whose teenage daughters had to wash themselves with a bottle of water during menstruation. In other instances, she continued, she heard mothers who feared losing their children because their water was shut off; heads of household who feared losing access to water without any prior notice; others who feared receiving unaffordable and arbitrary water bills.

The Special Rapporteurs observed that the measures taken so far by authorities had not been of assistance to those who are chronically poor and face water shut-offs. More worryingly, they said, the city failed to maintain any data on how many people have been living without tap water.

As a result, they called for the establishment of a mandatory federal water and sewerage affordability standard along with the introduction of “special policies and tailored support for people in particularly vulnerable circumstances.”

“Every effort should be made by all levels of government to ensure that the most vulnerable are not evicted from or lose their housing as a result of water shut-offs or water bill arrears,” Ms. Farha concluded.

“Where an individual or family is rendered homeless due to water shut-offs, the City of Detroit must have in place emergency services to ensure alternate accommodation with running water is available.”

US discriminates on right to safe water and sanitation, says UN expert 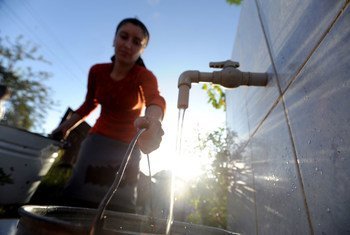 25 June 2014
Disconnecting water from people who cannot pay their bills is an affront to their human rights, a group of United Nations experts said today, amid reports of widespread water shut-offs in the United States city of Detroit for non-payment.