Women and young people must play a central role in establishing a long-term peace for Africa’s Great Lakes Region amid the area’s renewed efforts to overcome a past scarred by conflict, a top UN official said today.

Following his visit last week to Burundi, where he met with the country’s President, Pierre Nkurunziza, as well as key political figures and other civil society stakeholders, Said Djinnit, the Special Envoy of the Secretary-General for the Great Lakes Region, expressed his commitment to ensuring a regional peace through the Peace, Security and Cooperation Framework, and by working with its 13 signatories.

Established on 24 February 2013, the PSC Framework is a diplomatic push aimed at ending the recurring cycles of conflict and violence that have regularly afflicted the eastern Democratic Republic of the Congo (DRC) and the wider Great Lakes region for the past 17 years. 13 African countries have signed the Framework which is seen as an avenue of hope for the region’s people to build stability by addressing the root causes of the conflict and fostering trust between neighbours.

As part of his mandate, one of Mr. Djinnit’s responsibilities is to draw attention to the insecurity in the Democratic Republic of the Congo (DRC), where fighting and a decrease in financial resources is causing millions of people to go hungry.

Described as a “hallmark” agreement by the Special Envoy’s office, the Framework calls on signatories to respect the sovereignty of neighbouring countries in terms of international affairs and territorial integrity; to neither tolerate nor provide assistance to armed groups; to strengthen regional cooperation, including economic integration and judicial cooperation; and, to neither harbour nor provide protection to any person accused of war crimes or crimes against humanity.

In Burundi, Mr. Djinnit also met with leaders of both the country’s ruling political party, the National Council for the Defense of Democracy – Forces for the Defense of Democracy, and of the opposition coalition, whom he urged “to work toward opening the political space and promoting inclusiveness.” He added that such an approach would be “the best way to achieve lasting stability,” according to a press release.

At the same time, in a meeting with a cross-section of Burundian women groups, the Special Envoy informed them of the establishment of a Great Lakes coalition of civil society actors to develop and coordinate a regional approach for the monitoring and evaluation of the Framework’s implementation. Moreover, he reassured them of his intention to support the enhancement of initiatives targeting women and youths while stressing “the centrality of the role for women and youths” in the Framework.

Upon his departure from Bujumbura, Burundi’s capital, Mr. Djinnit made a stop-over in Kinshasa on his way to Luanda where he was expected to take part in the 3rd Joint International Conference of the Great Lakes Region/South African Development Community Ministerial Meeting. 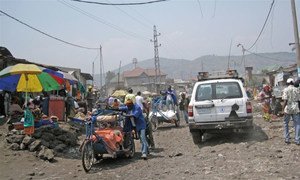 United Nations Secretary General Ban Ki-moon today said that addressing the root causes of the conflict in eastern Democratic Republic of the Congo (DRC) and the region requires a recommitment to all national and regional commitments under the agreed-to peace Framework.