WFP/Enrique Pulido
This ship in Las Palmas, Spain, is being loaded with WFP supplies and 1,920 metric tons of USAID-donated commodities and headed for Ebola response operations in Guinea.
18 October 2014

The United Nations concluded today a meeting on strengthening the international community's support to efforts by the Governments of countries at the forefront of efforts to turn back the unfolding Ebola outbreak in West Africa, on tackling the crisis.

Wrapping up a four-day meeting in Accra, Ghana on strengthening the international community's support to efforts by Guinea, Liberia and Sierra Leone to tackle the Ebola crisis, top-level officials from the UN system and partner organizations reaffirmed the need to move rapidly and in a coordinated, precise manner to defeat the disease.

According to a press release from the Ghana-based UN Mission for Ebola Emergency Response (UNMEER), today's meeting produced an operational framework to ensure the wider UN system adopts a unified and coordinated approach to the international support being provided to national response plans.

This comes as the UN has shifted into high gear to support the efforts of hard-hit countries in tackling the outbreak on all fronts, from food aid to delivery of building supplies, and providing healing and training for survivors.

Speaking to reporters at UN Headquarters in New York late last week, Secretary-General Ban Ki-moon hailed the resilience of West Africa's people and governments but underscored that “they have asked for our help…we need to turn pledges into action. We need more doctors, nurses, equipment, treatment centres and medevac capacities.”

As the scale-up continued, UNMEER chief Anthony Banbury welcomed the arrival last Wednesday in Accra of a massive German aircraft which will deliver needed supplies and material to affected countries in the region. "This flight is a welcome reflection of the international community's support for the efforts to stop Ebola and help those affected by it – this support is vital if we are to stop the virus," he said.

Today's meeting in Accra was attended by the Chef de Cabinet of the UN Secretary-General, Susana Malcorra; the Director General of the UN World Health Organization (WHO), Dr. Margaret Chan; and the Executive Director of the World Food Programme, Etharin Cousin.

Also present were the Special Envoy of the Secretary-General on Ebola, Dr. David Nabarro and UNMEER chief, Mr. Banbury.

Among the other participants were senior officials from UN agencies, funds and programmes, as well as from international partners such as the World Bank, the United States Centers for Disease Control and Prevention and the United Kingdom Department for International Development.

UNMEER noted that Mr. Banbury will return to Guinea, Liberia and Sierra Leone next week to further consult with their leaders on the way forward and to brief them on the operational plans produced in the meetings that were concluded earlier today.

The Governments of Guinea, Liberia and Sierra Leone – each of which has the final decision on the overall approach and strategy for dealing with Ebola in their respective countries – have national response plans in place and have been responding to the crisis for many months. 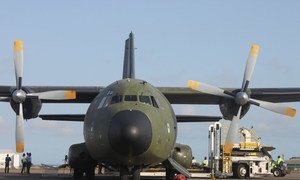 The United Nations continues to ramp-up its Ebola response, reaching more than 530,000 people with food assistance in hard-hit Liberia, Guinea and Sierra Leone, and, in the latter country, gathering survivors for a meeting to help deal with the psychological aftermath and stigma they face re-entering their communities.