In the wake of an overnight attack by suspected Ugandan-based rebels near the eastern Democratic Republic of the Congo town Beni – the second deadly assault in 48 hours – the United Nations envoy in the country is calling for 'decisive joint military actions' by the Congolese army and UN peacekeeping troops to end the group's reign of terror.

In a statement, Martin Kobler, head of the UN Organization Stabilization Mission in the DRC (MONUSCO), uregd “decisive joint military actions of FARDC [Congolese army] and MONUSCO to start as soon as possible in order to relieve the population from the terror imposed by the ADF [Allied Democratic Forces], once and for all”.

Around two dozen people in Eringeti, North of Beni were killed by suspected ADF elements in the night between 17 and 18 October, the Mission says. This follows an incident in the early evening of 15 October, when a group of assailants presumed to belong to the ADF attacked the Ngadi and Kadu localities in Beni area leading to the death of more than two dozen people.

“This sequence of violence, killings, assassinations, and human rights violations in Beni territory needs to stop immediately and I strongly condemn these atrocious acts” added Mr. Kobler, who is also the Special Representative of the Secretary-General in the DRC.

Mr. Kobler was in Beni yesterday to pay tribute to the families of the victims of these atrocious attacks. While there, he and the Mission's acting Force Commander stressed MONUSCO's full and unwavering determination to neutralize all illegal armed groups in eastern DRC, including the ADF.

Meanwhile, in addition to the increased engagement of its Force, MONUSCO has ordered a more active presence of its Police components in the area. 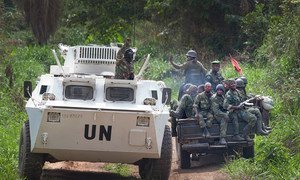 The top United Nations official in the Democratic Republic of the Congo today condemned a recent upsurge in deadly attacks in the eastern territories linked to the Allied Democratic Forces (ADF) rebel group.