MINUSMA/Marco Dormino
A UN peacekeeper from Niger on patrol in Gao, Mali.
17 October 2014

Welcoming the scheduled resumption on 19 October of the inter-Malian negotiation process in Algiers, the United Nations Security Council today called on all parties in Mali “to engage in good faith and in the spirit of compromise” in the talks towards the ultimate end of agreeing a “comprehensive and inclusive” peace deal.

The Council's call on the Malian parties to fully respect a months-old ceasefire and to swiftly engage in relevant agreed confidence-building measures come as UN spokesperson Stéphane Dujarric announced earlier today that the head of UN Peacekeeping Operations, Hervé Ladsous, is currently in the Algerian capital for the for the talks.

“He will encourage the parties to negotiate in a spirit of compromise so they can reach a comprehensive peace agreement. As you know, such agreement is in the cornerstone of peace, stability and security in Mali,” continued Mr. Dujarric, adding that the Peacekeeping chief will also encourage all parties to respect the cease-fire on the ground, and urge armed groups to collaborate with the UN Mission there, otherwise known as MINUSMA, in the prevention of terrorist attacks in line with their commitments already agreed to on 16 September.

In their press statement issued in New York, the members of the Council welcomed the expected resumption of the negotiations and commended Algeria's facilitation role, at the request of the Malian authorities, in the organization of formal peace talks and in convening the Government of Mali and the signatory and adherent armed groups of the Ouagadougou Agreement.

The Council called on the Malian parties to fully comply with their commitments in the roadmap signed on 24 July 2014, and to engage in good faith and in the spirit of compromise in the comprehensive peace talks in Algiers when they resume.

In addition, the Council “encouraged further engagement with all communities of the North of Mali, including through civil society organizations, in order to reach a comprehensive and inclusive peace agreement to bring a durable political resolution to the crisis and long-term peace and stability throughout the country, respecting the sovereignty, unity and territorial integrity of the Malian State.”

Announcement of the resumption of the talks comes in the wake of a series of deadly attacks against the UN Mission in the country, including a bomb attack and an ambush that killed nine Nigerien MINUSMA peacekeepers in Mali's Gao region, bringing the total number of fatalities suffered by the mission to 31 peacekeepers killed and 91 wounded since it first deployed on 1 July 2013.

For their part, the Council members in their statement today expressed their serious concern about the deteriorating security situation in the North of Mali and reiterated their strong condemnation of all deadly attacks against MINUSMA. They urged the armed groups operating in northern Mali to demonstrate their commitment to cooperate with the UN to immediately stop and condemn attacks against peacekeepers, in line with the declaration they signed on 16 September 2014 in Algiers.

“Recognizing the lessons of the previous efforts by the Malian parties, which did not achieve a durable peace in Mali,” the Security Council affirmed the importance for the Malian parties to devise mechanisms for the full, faithful and immediate implementation of a future comprehensive and inclusive peace agreement, which should be signed during the resumed talks. 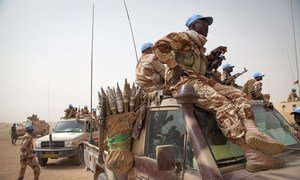 From Mali to the Golan and the Democratic Republic of the Congo, United Nations peacekeeping missions are facing increasing challenges as they operate in some of the most difficult security environments around the world, senior UN military officials told the Security Council today as they weighed field strategy for the world body’s “blue helmets.”