Survivors of Ebola who have developed immunity to the virus are being trained to care for children in Liberia and Sierra Leone, a United Nations official today announced.

People who survived Ebola at these “interim care centres” can give small children the love they need in a world where touching is feared.

“It’s strange, a very unhuman experience,” Sarah Crowe, Crisis Communications Chief at UNICEF told journalists in New York following a five-week mission to Liberia, where “fear of contagion, contamination has eroded that sense of compassion.” Liberia, along with hard-hit countries Sierra Leone and Guinea, is on the frontlines of efforts to stop the outbreak.

The virus has “hijacked” every aspect of life and “changed the way people live...and how people die,” said the UN official, beginning her presentation by disclosing her temperature and showing a bottle of hand sanitizer to the gathered reporters.

The UN agency estimates that some 3,700 orphans are in the region, of whom 600 have been reunited with an existing or extended family member.

Among the moving survivors’ stories captured by UNICEF, four-year-old Amadou wakes up his sister, Mary, at 4:30 in the morning to ask where their mother is. He has asked almost daily since he was discharged from the Ebola Treatment Unit in Kenema, almost two months ago.

“I don’t know what to tell him,” 15-year-old Mary told UNICEF. “How can I explain death to a 4-year-old when I barely just understood it myself? This wasn’t supposed to be my responsibility.”

Their mother fell sick after helping a woman in the neighbourhood. They thought it was malaria, but her condition worsened quickly.

“They called for an ambulance, and she was rushed away to the General Public Hospital in Kenema. It was the last time that I saw her,” Mary said.

Across West Africa, children face stigma and rejection from their communities and their relatives, especially if the children are survivors themselves.

A recent UNICEF survey of 1,400 homes across the country found that about 96 per cent of those households reported some discriminatory attitudes toward people with suspected or confirmed Ebola, and 76 per cent said they would not welcome someone who was infected with Ebola back into their community, even if that person has recovered.

“Children who have been in interim centres are often shunned,” Ms. Crowe said. She recalled the story of siblings living under a tree, chased out of their village by neighbours too afraid to have them near after their care-givers died.

However, she also told the story of survivors of the virus, who are reunited with their families. Among them, was Ann Marie, a girl Ms. Crowe met while visiting Montserrado and Loofah counties, which encompass Monrovia, and who has since returned home.

“They each have a survivor’s certificate. For them, it’s really like a new birth certificate,” Ms. Crowe said speaking about a photograph of the family with the documents.

In Kenema, Sierra Leone, 25 Ebola survivors met earlier this week to share their experience of the virus, learn how to deal with its psychological aftermath, and find ways to help infected community members, particularly children. The event was organized by the Ministry of Social Welfare, Gender and Children’s Affairs, with support from UNICEF and other partners.

“A key challenge that parents, care workers and many of us working on the Ebola response are facing is how to care for children who have been affected or infected with Ebola without putting their care givers at risk,” said Roeland Monasch, UNICEF Representative in Sierra Leone.

“One creative way to address this gap is to work with Ebola survivors who can provide these children with the love, care and attention they so badly need.”

In New York, Ms. Crowe also spoke about make-shift quarantine centres created by communities where families stay for 21days, the incubation period for the virus, and which are sometimes set up in empty schools.

Classes have been canceled throughout the countries, leading UNICEF and its partners to pilot an “emergency on-air schooling” for children, many of whom have said they are frustrated at not being able to continue their studies.

The agency is also setting up water and sanitation stations, having shipped a record amount of chlorine from its depot in Copenhagen, Denmark. UNICEF has appealed for over $200 million to respond to the Ebola outbreak, which is part of a broader, six-month appeal for $987.8 million that governments and humanitarian agencies require to fight the disease.

“Our message is that we can’t be crushed by this,” Ms. Crowe said, encouraging every non-governmental organization “that isn’t there but who should be there.”

She noted, however, that the international community is in “totally unmapped terrain” without a template or protocols for such situations.

The death toll in the outbreak is now at 4,546 out of 9,191 known cases in Guinea, Liberia and Sierra Leone, according to the latest figures from the UN World Health Organization (WHO).

Also in Sierra Leone, the UN World Food Programme (WFP) and its partners today reported the start of a food distribution in the outskirts of the capital, Freetown, to 265,000 people.

It is the biggest one-off food distribution in the country since the start of the Ebola outbreak, according to a UN spokesperson.

More than 700 aid workers are expected to be mobilized in just one day to distribute over 800 metric tons of food, including rice, pulses, vegetable oil and salt, to meet the needs of families’ for about 30 days.

The aim of the distribution is to stabilize quarantined families by giving them enough to eat so that they do not have to leave their homes to look for food.

Before today’s distribution, in the suburb of Waterloo, WFP and its partners had provided food assistance to more than 300,000 Ebola-impacted people across Sierra Leone.

The UN agency is scaling up to reach 600,000 people impacted by the crisis, according to a spokesperson. 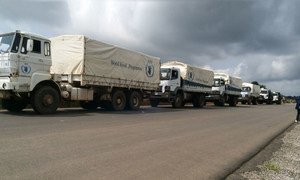 Secretary-General Ban Ki-moon today called on the international community to step up its efforts to respond to the Ebola crisis and turn pledges into action, while the United Nations health agency warned of continuously deteriorating situation in Guinea, Liberia and Sierra Leone.