Senior Humanitarian Coordinator on the ground Mrs. Claire Bourgeois said she is “extremely concerned” by the loss of lives during a new wave of attacks this week in the capital Bangui, in astatement, released by the UN Office for the Coordinator of Humanitarian Affairs (OCHA) last night.

More than 159 wounded people have been received in medical facilities since the violence flared up in Bangui a week ago and more than 3,000 people have been displaced since October 14, including many children.

The high number of wounded, the burning of houses, and the fact that victims are compelled to seek refuge in displacement sites is “deplorable,” added Mrs. Bourgeois.

Medical staff have been “working day and night under difficult conditions” to take care of the wounded, said Mrs. Bourgeois, adding that “without these people…without their determination, the toll had without doubt been even higher.”

Echoing that, the World Health Organization (WHO) representative in the CAR, Dr. Michel Yao called on armed groups to allow patients and medical staff safe access to hospitals and clinics. Health services are, and must stay, available to all without discrimination.

“Ambulances must be allowed to move around freely. It is unacceptable that patients and [the] wounded are unable to get to hospital or are taken there in wheelbarrows,” said Mr. Yao.

“No gun is allowed in any health facility,” he added.

In all, the latest wave of violence has displaced some 6,500 people, but that number could be much higher, UNHCR reported on Monday. There are some 410,000 internally displaced persons in the CAR, including over 60,000 in 34 sites in Bangui.

Around 420,000 CAR refugees had fled to the neighbouring countries. 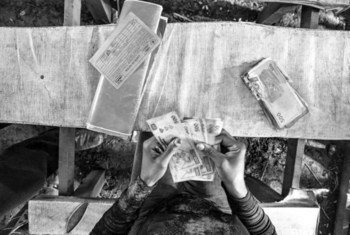