UN Photo/Isaac Billy
Residents at the camp for internally displaced persons (IDPs) at the UN Mission for South Sudan (UNMISS) Malakal Base in the Upper Nile State wait in line at the base's health facility.
17 October 2014

The United Nations Mission in South Sudan today strongly condemned the recent abductions of the world body’s personnel at the airfield in Malakal and demanded the safe release of those still being detained.

Three contractors employed by the Mission (UNMISS) who were working at the airfield were seized on 10 October by an unidentified armed group of 15 to 20 men in uniformed and civilian clothes and driven away in a pick-up truck.

Two of the three were released the next day, while the third is still missing, the Mission stated in a news release.

Then on 16 October, a staff member of the UN World Food Programme (WFP) was similarly seized by a group of armed men at the same airfield while he was in the process of boarding a UN flight. He is still missing.

“UNMISS strongly condemns these abductions and demands the safe release of the missing individuals,” the Mission stated.

It noted that there is still a lack of clarity on the identity of the abductors, and various authorities and commanders have assured UNMISS and WFP that they are making all efforts to track down the abductors and secure the release of the two abducted individuals.

The Mission emphasized the responsibility of the Government of South Sudan under the Status of Forces Agreement with the Organization, to protect UN personnel, “irrespective of the identity of the abductors.”

UNMISS and WFP are actively involved in efforts to secure the release of the abductees, and urged the authorities and commanders to redouble their efforts to locate and free them. 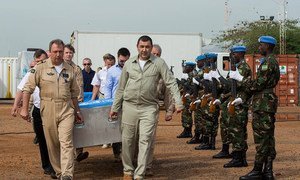 The United Nations Mission in South Sudan (UNMISS) said today its initial investigation Has revealed that UN helicopter that crashed near Bentiu late last month was shot down.