On international Day, Ban declares eradication of poverty a 'most fundamental obligation'

A scavenger picks through garbage in a low-income neighbourhood of Jakarta, Indonesia. World Bank/Farhana Asnap
17 October 2014

Amid pronounced increases in global inequality, the United Nations marked the International Day for the Eradication of Poverty today with calls to accelerate efforts in eliminating poverty in all its forms.

“Entrenched poverty and prejudice, and vast gulfs between wealth and destitution, can undermine the fabric of societies and lead to instability,” Secretary-General Ban Ki-moon said in his message for the Day, which is commemorated annually on 17 October.

The Day will be marked at UN Headquarters in New York at three separate events, including an official commemoration in the form of a panel discussion entitled 'Leave No One Behind: Women Poverty and Participation,' and an art exhibition giving voice to people living in poverty through their collected artworks.

In his remarks, the Secretary-General said: “Where poverty holds sway, people are held back. Lives disfigured by poverty are cruel, mean and, often, short.”

Mr. Ban admitted that “enormous” successes had been achieved with the Millennium Development Goal (MDG) target of halving the proportion of people living in poverty already reached. In addition, he pointed out that at least 700 million people had been lifted out of extreme poverty between 1990 and 2010.

But, observed the Secretary-General, the damaging impact of entrenched poverty remained a constant due to the aftereffects of the 2008 financial crisis as an estimated 2.4 billion people continue to survive on less than $2 a day. Moreover, he noted that women and girls were still largely excluded from opportunities of self-development and fulfilment, often isolating them, and their families, in pockets of poverty.

“Since the beginning of the financial crisis, inequality has grown even more pronounced than it was already,” Mr. Ban declared. “Discrimination against women and girls remains a blatant injustice, robbing the entire development enterprise of one of the keys to progress.”

With the fight against poverty at the core of the UN development agenda, the International Day for the Eradication of Poverty has been observed every year since 1993, when the UN General Assembly designated this day to promote awareness of the need to eradicate poverty and destitution in all countries ahead of the MDG deadline set for 2015.

This year's theme for the Day, 'Leave no one behind: think, decide and act together against extreme poverty,' draws much-needed attention to the challenge of identifying and securing the participation of those experiencing extreme poverty and social exclusion in the “Post-2015 Development Agenda” that will replace the MDGs.

Turning to the UN-wide preparations for a post-2015 sustainable development agenda, the Secretary-General reminded UN Member States and all parties not to lose sight of their “most fundamental obligation” to eliminate poverty and build “a sustainable, peaceful, prosperous and equitable future for all.” 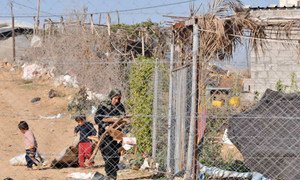 With inequalities growing dramatically both within and between countries over the last 10 years, the United Nations marked the International Day for the Eradication of Poverty today with calls to tackle not only the material aspects of the scourge but also its social and educational dimensions and the unequal access to justice.