Robert Piper, the UN Regional Humanitarian Coordinator for the Sahel, told journalists in New York that the world body remains “very, very concerned” about the region, which stretches from Senegal to Chad, including Mauritania, Burkina Faso, Mali, Niger, Nigeria, Cameroon and the Gambia.

About 25 million people in the Sahel are estimated to be food insecure, with a “real deterioration” from January to July of this year as people’s stocks dwindled ahead of the rainy season. During that time frame, more than 6 million food insecure people crossed the UN’s emergency threshold.

Children are particularly vulnerable, the senior UN official noted, with some 6.4 million severely or acutely malnourished.

In addition, the UN and its partners are monitoring the region for epidemic risks that range from yellow fever to cholera, and also now include the Ebola virus which is “in the neighbourhood.”

“This is what we call the chronic emergency caseload – the food insecure, the acutely malnourished, people at risk for epidemic,” said Mr. Piper, noting that the group includes up to 30 million people in the region.

In February, the UN and its global humanitarian partners today appealed for $2 billion for the region. As of today, a bit over half of that amount has been funded.

“Humanitarian aid can buy time… but the trend is very discouraging,” Mr. Piper said. “Ten years ago, we were managing a $200 million a year hum response, today we are seeking $2 billion.”

While the figures tell a “terrible story of suffering” the needs are “enormous, unsustainable” and driven by structural needs as a result of demographic growth, climate change, and access to basic services.

“Nothing can substitute for governments putting in place the right policies,” Mr. Piper said.

In addition, the region is fraught with violence and insecurity, which has created protracted internal displacement. Internally displaced persons, combined with refugees and returnees to the region, have pushed population growth in the region in this year alone from 1.6 million to 3.3 million.

“The big numbers are coming from Nigeria, but also from the Central African Republic (CAR),” Mr. Piper said, noting also the situation in the northern Mali where 31 UN peacekeepers and at least two non-governmental workers have been killed this year. 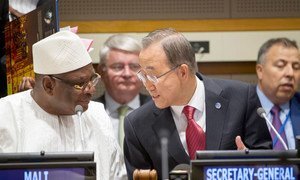