On regional tour, UN envoy for Syria calls for political stability in Lebanon

Lebanon’s political environment should stabilize to face the threat from the terror group Islamic State of Iraq and the Levant (ISIL), and ahead of what will be a “very crucial period” in the political process in Syria, a senior United Nations official today said during a visit to the region.

“We are still in the process of understanding what has changed in the region in terms of some perception of how to address in a political format, through a political process, the conflict in Syria,” the Secretary-General’s Special Envoy for Syria, Staffan de Mistura, said following his meeting with Lebanese Prime Minister Tammam Salam.

He is also due to meet with Foreign Minister Jebran Bassil and other Lebanese stakeholders.

The Special Envoy arrived to Lebanon as part of his second tour of a visit to the region to “acquire more information and also more ideas.”

He noted the international community’s concern with the “heavy price” that Lebanon is paying in terms of Syrian refugees it is hosting, expected to number around 1.5 million by the end of the year, as well as the proximity to the conflicts in Syria and Iraq.

“We also see with concern what has been happening just recently, just on the border,” Mr. de Mistura said in reference to attacks against the Lebanese Hizbollah movement.

“The Lebanese political environment should be stabilizing the sooner and the better because the stronger Lebanon is the easier it will be to face what I think is going to be a very crucial period but hopefully with some type or form of political process in Syria,” Mr. de Mistura said.

The UN helped to bring Lebanon’s civil war to a close in the early 1990s, but the focus has since shifted to the conflict between Israel and Hizbollah, and internal power struggles.

The Special Envoy plans to travel next to Tehran, Iran, and then Turkey and Russia, as well as other countries in the Middle East.

The conflict has also spawned a refugee crisis in which some 2.5 million people are being sheltered in Lebanon and other neighbouring countries. In Lebanon, roughly one out of every four people is a Syrian refugee, the UN estimates. 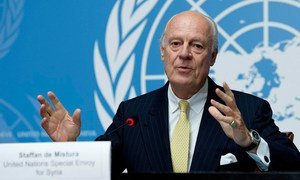 The United Nations will adopt a minimalistic, concrete and realistic approach to addressing the crisis generated by Syria’s ongoing conflict, a senior UN official said today as he warned about the growing dangers facing civilians amid the Islamic State of Iraq and the Levant’s (ISIL) latest offensive in the country.