MONUSCO/Hanan Talbi
A victim testifies before the Military Court in the DRC during the trial of Lt. Colonel Bedi Mobuli Engangela, charged with numerous human rights violations.
15 October 2014

The call comes as the UN Joint Human Rights Office in the DRC (UNJHRO) released its in-depth report documenting a number of grave human rights abuses, including summary and extrajudicial executions and enforced disappearances, carried out against civilians by Congolese security forces during ‘Operation Likofi’ (Punch) aimed at curbing urban delinquency in the country’s capital, Kinshasa.

“I am appalled by the gravity of the human rights violations documented in this report,” said UN High Commissioner for Human Rights Zeid Ra’ad Al Hussein in a press release.

“And I call on the Congolese authorities to bring to justice without delay the perpetrators of these human rights violations who cannot go unpunished,” Mr. Al Hussein added.

Initially charged with the objective of tracking down delinquents, or kulunas , ‘Operation Likofi’ quickly established a negative reputation as alarming reports of disappearances and assassinations of children and youth emerged within a week of the Operation’s launch in November 2013.

The UNJHRO report released today further expands on these allegations, documenting 41 victims, including four children, of “violations of the right to life” and accusing State security forces of perpetrating the majority of the killings.

Based on more than 70 testimonies from numerous sources, including within the police itself, the report notes that members of the DRC’s Légion nationale d’intervention (LENI) and of the Groupe mobile d’intervention (GMI) would operate at night, entering specific neighbourhoods of Kinshasa in unmarked vehicles and wearing hoods in order to commit the abuses.

In a statement, Martin Kobler, the head of the UN Organisation Stabilization Mission in the DRC (MONUSCO) called on local authorities to quickly move and ensure that such crimes are no longer perpetrated and that those responsible are punished according to the rule of law.

“This shows how urgent it is to accelerate security sector reform and to establish strong accountability mechanisms within the Congolese police,” he declared.

Today’s UNJHRO report follows the release last week of the panel’s survey on rights violations committed by the March 23 Movement (M23) in North Kivu Province between April 2012 and November 2013. It revealed that during this period, when M23 had effective control of parts of North Kivu, serious violations of human rights and international humanitarian law – which could constitute international crimes as well as crimes under the Congolese Penal Code – were committed by the group. 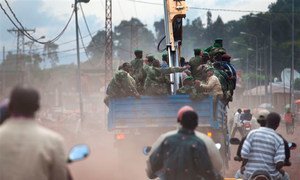 Senior United Nations officials appealed today for justice for crimes committed by the March 23 Movement (M23)in parts of the North Kivu province in the Democratic Republic of the Council (DRC), on the heels of a new UN- backed report citing a raft of grave rights abuses committed by the armed group between April 2012 and November 2013.