On World Day, UN spotlights handwashing as vital tool in fight against Ebola

“Handwashing with soap is one of the cheapest, most effective ‘vaccines’ against viral diseases, from the seasonal flu, to the common cold,” Sanjay Wijesekera, head of UNICEF’s global water, sanitation and hygiene (WASH) programmes, said in astatement on the Day.

UNICEF is using this year’s Day to raise awareness about Ebola in the affected countries, counter misconceptions and promote handwashing to combat the further spread of the disease. The agency has distributed protective supplies such as gowns, gloves, and bleach – as well as 1.5 million bars of soap in Sierra Leone alone, and millions more in Liberia and Guinea.

“Our teams on the ground in Sierra Leone, Liberia and Guinea are stressing the importance of handwashing as part of a raft of measures that are needed to halt the spread of Ebola. It is not a magic bullet, but it is a means of additional defence which is cheap and readily available,” said Mr. Wijesekera.

Apart from Ebola, figures released recently by UNICEF and the UN World Health Organization (WHO) say in 2013 more than 340,000 children under five – almost 1,000 a day – died from diarrhoeal diseases due to a lack of safe water, sanitation and basic hygiene.

These viral diseases can be easily prevented if children are taught to wash their hands with soap before eating and after using the toilet. UNCIEF says that when handwashing becomes an ingrained habit, it could save more lives than any single vaccine or medical intervention, cutting deaths from diarrhoea by almost half and deaths from acute respiratory infections by one-quarter.

This simple act is critical to meeting the Millennium Development Goal (MDG) of reducing deaths among children under the age of five by two-thirds by 2015.

The recent outbreak of Ebola virus in West Africa has taken its toll on the health services in the affected countries, making the practice of handwashing even more important in warding off these common diseases, UNICEF says.

“It is clear there is no simple fix, and it is going to take a massive international effort to stem the tide of this disease,” said Mr. Wijesekera. “But it is crucial to get the word out on what measures can be taken now in the hardest hit areas, even as additional help continues to arrive from the outside. Handwashing is one of those measures.”

Each year, over 200 million people are involved in celebrating the Day in over 100 countries. For instance, in Sri Lanka, more than 38,400 students in 96 schools will take part in handwashing events, along with politicians and members of the public.

In Lebanon, the SMS message, ‘Save your health; wash your hands’ will be sent to hundreds of mobile phone users. And in Mali, there will be a nationwide media campaign with handwashing events and soap distribution in dozens of schools.

Major events and celebrations are also scheduled in The Gambia, Nigeria, and Cambodia, among other countries. 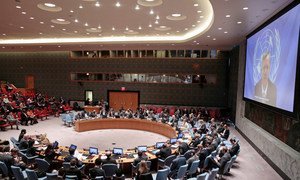 The Ebola outbreak is “winning the race” against attempts to contain it, the head of the United Nations mission working to stop the deadly virus warned the Security Council today as he urged the international community to help expand on-the-ground efforts across the affected nations in West Africa.