A Cheetah mother with her two cubs in Kenya. (Image used under license from Shutterstock.com)
15 October 2014

The protection of biodiversity is directly related to the eradication of poverty and stimulation of economic growth, senior United Nations officials stressed today at a meeting in Republic of Korea, calling on countries to take an integrated approach when it comes to development.

“Maintaining biodiversity is related not only to direct conservation measures, but also to pursuing poverty reduction and human development in ways which are sustainable. This is of critical importance to the success of the post-2015 development agenda,” said Helen Clark, Administrator of the UN Development Programme (UNDP) at the opening of the High Level segment of the of the 12th meeting of the Conference of the Parties to the Convention on Biological Diversity (CBD COP-12) in Pyeongchang.

“Human survival and wellbeing depend heavily upon the earth’s biodiversity. Biodiversity loss not only has serious implications for our natural environment: it also undermines our livelihoods, health, and food and water security,” she said in her remarks to the High-Level segment, which runs through Thursday, 16 October.

Miss Clark noted that biodiversity protection will be crucial to the achievement of the sustainable development goals being developed by the UN General Assembly.

The working group crafting those targets, which will succeed the landmark UN Millennium Development Goals (MDGs) in 2015, has proposed two “stand-alone” goals for biodiversity: one on oceans; and another on terrestrial ecosystems. It has also proposed including biodiversity targets in other goals, such as those on food security and poverty eradication.

“Tackling poverty and creating economic opportunity goes hand in hand with protecting biodiversity” Miss Clark said. “It will require leaders to see the links between the complex challenges we face and the solutions.”

For his part, the Executive Director of the CBD, Braulio Ferreira de Souza Dias stressed that bringing biodiversity into the public discourse is essential to make progress.

“We have to promote the understanding that biodiversity underpins sustainable development for economic and social well-being,” Mr. Dias said.

He referenced the recently released Global Biodiversity Outlook 4 report, which found that while there has been an increase in action by countries to protect biodiversity, these are not enough and efforts need to be scaled up if they are to achieve the 20 biodiversity goals known as the Aichi targets before their 2020 deadline.

“The Strategic Plan for Biodiversity is an agenda for sustainable development,” he said, adding that it goes beyond concern of the environment sector. The Plan broke new ground by recognizing the need to mainstream biodiversity into other sectors and processes.

“And nowhere is that more vital than in the post-2015 development agenda and the sustainable development goals,” he said, explain that simply put, biodiversity is a critical foundation of the Earth’s life support system on which the welfare of current and future generations depends, as it provides, among others, basic goods, such as food, fibre, fuel and medicine; and provides ecosystem resilience and contributes to the ability to respond to unpredictable global changes and natural disasters.

The High Level Segment of the COP-12 will give Government ministers and leaders from civil society organizations an opportunity to express their views on a wide range of topics related to biodiversity such as sustainable development, climate change, the economy and peace and security. 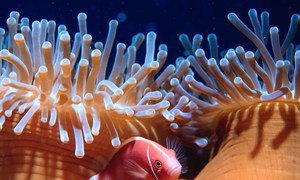 After decades of negotiations, the Nagoya Protocol on Access and Benefit-Sharing entered into force on Sunday, enhancing opportunities for the equitable sharing of benefits of the world’s biodiversity.