Rural women are key agents for achieving the transformational economic, environmental and social changes required for sustainable development, the United Nations declared ahead of the International Day commemorated as an opportunity to promote their empowerment.

“Collectively, rural women are a force that can drive global progress,” said Secretary-General Ban Ki-moon in a message marking the occasion, which he also said was especially personal.

“My mother has lived her whole life in the countryside. Although she did not receive much of a formal education, I grew up appreciate her wisdom, resilience and intelligence,” he said.

These qualities are shared by millions of rural women around the world, said Mr. Ban. This is why women living in the countryside are essential if we as an international community to move ahead on the post-2015 development goals and conclude a universal climate agreement.

“Because they often live on the frontlines of poverty, natural disasters and other threats, rural women have an enormous stake in the successes of our global campaigns,” the UN chief added.

First, we must address the discrimination and deprivation that rural women continue to suffer, Mr. Ban said. Too many lack access to land, markets, finance, social protection and services. Many also face grave security risks in the course of their life-saving tasks, such as collecting water or fuel.

The majority of rural women depend on natural resources for their livelihoods. In developing countries, they make up more than 40 per cent of the agricultural labour force. They produce, process and prepare many of society’s meals, frequently taking primary responsibility for household food security, health status and education opportunities.

“When we give rural women access to productive agricultural and natural resources, we empower them. They, in turn, can contribute more to alleviating hunger and boosting the ability of their communities to cope with the effects of climate change, land degradation and displacement. This benefits all people,” said Mr. Ban.

Echoing that sentiment, UN Women Executive Director Phumzile Mlambo-Ngcuka said in her message on the Day that all over the world, gender inequality in land and other productive resources is intrinsically related to women’s poverty and exclusion. Women’s rights to access, use, control, and ownership of land and other productive resources are essential to reverse this.

“Sustainable solutions are not imposed from the outside. It is of utmost importance that rural women’s voices are heard in discussion, debates and policymaking about their lives,” Ms. Mlambo-Ngcuka added.

“This situation persists, despite international and regional instruments and policies that recognize women’s rights to land and important developments in many countries to ensure and protect these rights, she said, underscoring that UN Women’s publication Realizing Women’s Rights to Land and Other Productive Resources , published with the Office of the UN High Commissioner for Human Rights (OHCHR), gives a comprehensive picture of the critical issues affecting women’s rights to land and presents recommendations, good practices and success stories.

“It is critical that women’s rights to land and other productive resources be addressed in the post-2015 road map and embraced by the future sustainable development goals,” the Executive-Director said, emphasizing the need for adequate data that is gender-disaggregated to shape the evidence base for policy change.

UN Women is on the ground supporting several initiatives that promote the leadership of rural women in shaping laws and policies.

In India, for instance, UN Women is supporting the Dalit Women’s Livelihoods Accountability Initiative, which is helping women marginalised by the caste system get jobs. Between 2009 and 2011, in eight districts, participation grew from 2,800 to more than 14,000. Many Dalit women now have bank accounts in their names and are unionized to defend their rights.

In Zimbabwe, along one of the poorest stretches of the Zambezi River, new equipment and training offered by UN Women has helped women from the Tonga ethnic group break into the male-dominated fishing industry. Instead of selling fish purchased from men’s boats, they now market their own catch.

UN Women has also partnered up with the UN Food and Agriculture Organization (FAO) and the UN World Food Programme (WFP) for the “Accelerating Progress towards the Economic Empowerment of Rural Women” initiative, which engages with governments to develop and implement laws that promote equal rights.

First observed in 2008, the International Day of Rural Women was established by the UN General Assembly, recognizing “the critical role and contribution of rural women, including indigenous women, in enhancing agricultural and rural development, improving food security and eradicating rural poverty.” 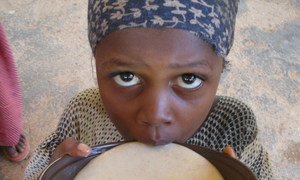 Ahead of International Day of the Girl Child, UN urges end to violence against women, girls

The United Nations has paid tribute to the almost one billion young and adolescent girls living around the world as many of them continue to face daily challenges to their development and overall diminished potential due to the enduring scourge of gender discrimination and violence.