14 October 2014
Warning that human rights defenders in crisis-torn Libya are being increasingly targeted by armed groups, the United Nations human rights chief today urged Libyan authorities to undertake prompt, thorough and impartial investigations into the incidents, to hold those found responsible to account, and to ensure an effective remedy for victims.

“The work of civil society activists, journalists and human rights defenders is particularly crucial in the context of the ongoing conflict in Libya,” said UN High Commissioner for Human Rights Zeid Ra’ad Al Hussein, in a press release strongly condemning the attacks.

According to Commissioner Zeid, rights defenders, political activists, bloggers and media professionals have been under increasing attack from armed groups in Libya since mid-May, when fighting between rival factions intensified in and around Benghazi and later erupted in Tripoli.

Further, he said UN human rights staff have received numerous reports of intimidation, harassment, abductions and murder of members of civil society, causing some human rights defenders to flee the country while others have curtailed their activism or gone into hiding, seeking protection for themselves and their families.

Individuals have been shot in the street while going to work or coming out of mosques after prayers. Many have received text messages or have been the subject of social media posts threatening them or their families with death, abduction or rape, he said.

“The climate of fear created by such attacks, coupled with the total impunity enjoyed by the perpetrators, threatens to silence the few independent voices emerging from within the country,” said Mr. Zeid, underscoring that victims of human rights violations and abuses in Libya rely on these important actors to document and draw attention to their plight.

Recalling that “attacks against civilians are war crimes”, the High Commissioner goes on to list a raft of disturbing incidents, including in Benghazi, where 10 people were murdered in a single day on 19 September, including two prominent young civil society activists, Tawfik Bensaud, 18, and Sami al-Kawafi, 17.

Since May, a number of other prominent public figures have been killed in the city, including newspaper editor Muftah Abu Zeid and lawyer and human rights activist Salwa Bugaighis. In Derna, East of Benghazi, lawyer Usama al-Mansuri was killed on 6 October, apparently after publicly criticizing a declaration by armed groups in the town pledging allegiance to the so-called ISIL.

Similarly, in Tripoli, since July a number of activists and other public figures have been abducted, received threats or had their homes looted or burned. One prominent human rights defender received text messages warning him to stop his advocacy work or else his children would be abducted and killed.

‘Women activists are particularly vulnerable and pressured to abandon public roles. One rights advocate reported that she had received several calls from armed groups warning that if she continued writing on women’s rights, she and her children would be killed. She and her family have since left the country,” Mr. Zeid said.

In another case, he said a human rights advocate and lawyer who had taken part in a public debate on women's rights received anonymous phone calls and text messages warning her that she would be abducted and killed. Several rights and political activists have also been targeted on social media. In one case, an activist was abducted soon after he was threatened on Facebook.

“Media professionals also continue to be targeted. A journalist in Tripoli reportedly left the country after receiving death threats on social media, as well as threats against his family,” he said, adding that another was abducted for four days in September.

“I condemn these attacks, which are taking place with impunity, with police officers, prosecutors and judges themselves being targeted by armed groups,” High Commissioner Zeid said and urged the Libyan authorities to take all possible measures to undertake prompt, thorough and impartial investigations, to hold those found responsible to account, and to ensure an effective remedy for victims.

The authorities should also do everything in their power to ensure adequate protection of victims, witnesses and officials supporting the administration of justice, as efforts continue towards establishing a sustainable ceasefire and political dialogue, he added.

High Commissioner Zeid warned the armed groups exercising effective control on the ground in Libya that their members and leadership are accountable under Libyan and international law for the abuses they are committing or failing to stop.

In this regard, he noted that on 27 August, the UN Security Council adopted a resolution on the situation in Libya, deciding that an asset freeze and travel ban measures shall apply to listed individuals or entities that plan, commit, or direct acts that violate international human rights and humanitarian law, or that constitute human rights abuses. 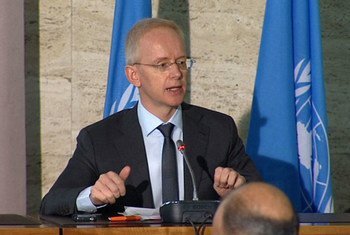