A new offensive launched by the Islamic State in Iraq and the Levant (ISIL) against the Iraqi city of Hit has triggered yet another wave of internal displacement in the war torn country, the UN refugee agency announced today, warning that those displaced were facing increased hardships amid advancing cold weather and overcrowded refugee camps.

In a news release issued from Geneva, the Office of the UN High Commissioner for Refugees (UNHCR) reported that an estimated 180,000 people had fled Hit, located in Iraq’s Anbar province, as ISIL fighters stormed the city, long considered a safe haven by many already fleeing the violence from other areas of the region. Many of those displaced were now sheltering with relatives and friends as well as in schools, mosques and public shelters already overwhelmed by Iraq’s mounting population of displaced persons.

“Until recently, Hit had been a safe haven for those who had fled earlier waves of violence in Ramadi, Fallujah and other parts of Anbar, providing shelter for some 100,000 displaced people,” the UNHCR statement noted, adding that the latest “exodus” from Hit represented “the fourth major wave of displacement in less than a year in Iraq.”

“Tens of thousands of desperate Iraqis are now caught is a rolling wave of multiple displacement amidst the conflict’s shifting frontlines.”

In one instance, UNHCR field staff met with a 30-year-old woman who had just fled from Hit with her elderly mother and disabled brother. The family had been displaced three times since January, fleeing ISIL’s advance throughout Anbar. Similarly, another 27-year-old woman with two young children escaped from the militants’ advance, fearing the impact of ISIL’s rule.

The news release also cited UNHCR spokeswoman, Melissa Fleming, as saying that the refugee agency was doing “its best to help, but the situation for all UN workers and partners on the ground was extremely difficult” amid the violence and massive displacement.

At the same time, the refugee agency warned that some 5,400 Syrian refugees fleeing the ISIL onslaught on the Syrian border town of Kobane had also entered Iraq from Turkey with another 10,000 to 15,000 expected to join them in the coming days. The refugees cited a number of reasons for leaving Turkey for Iraq, including civil unrest, the high cost of living, difficulties with aid, and the desire to join family members already living in the Kurdistan region of Iraq.

Although Iraqi border officials were screening the refugees as they crossed into the country, UNHCR protection teams had already set up a reception tent to accommodate refugees as they were processed and were assisting authorities in identifying “particularly vulnerable people,” the agency said.

♦ Receive daily updates directly in your inbox - Subscribe here to a topic.
♦ Download the UN News app for your iOS or Android devices.
syria|Iraq 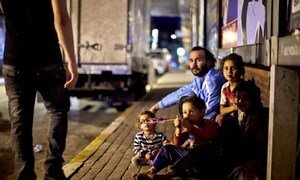 Three million Syrians will have registered as refugees outside of their country today, the UN refugee agency reported, amid accounts of increasingly horrifying conditions inside their homeland – cities where populations are surrounded, people are going hungry and civilians are being targeted or indiscriminately killed.