Back from her first visit to South Sudan, United Nations Special Representative of the Secretary-General on Sexual Violence in Conflict, Mrs. Zainab Hawa Bangura warned today that sexual violence is a consistent characteristic of the conflict there, and is being perpetrated by all the parties.

The Special Representative travelled to Bentiu, the capital of Unity state, to engage with the local commander of the Sudan People´s Liberation Army (SPLA), Government authorities, UN staff, humanitarian workers and survivors of sexual violence.

“What I witnessed in Bentiu is the worst I have seen in my almost 30 years in dealing with this issue. This is because of the combination of chronic insecurity, unimaginable living conditions, acute day-to-day protection concerns and rampant sexual violence,” said Mrs. Bangura.

“The bodies of women and children are the battleground of this conflict. In the words of a woman activist I met: ‘It is not just about rape, it is to inflict unimaginable pain and destruction,’” Ms. Bangura continued.

Her visit concluded with a Joint Communique with the Government that outlines clear steps they will take to prevent and address sexual violence crimes. During her time in the country, Mrs. Bangura met with South Sudanese President Salva Kiir, Ministers, the army, and the police. She also met with the Chairman of the South Sudan Human Rights Commission, women’s groups, community leaders, service providers, journalists and UN staff.

The situation on the ground has gotten worse. Following last December’s escalation of violence, there has been an additional dimension of sexual violence attacks and reprisals on an alarming scale, said Mrs. Bangura. There are also grave concerns of sexual violence perpetrated along ethnic lines with attacks fuelling reprisals and a cycle of recrimination and revenge.

Condemning these atrocities, she reminded all parties to the conflict, including Government forces and opposition, that they “cannot declare war on their own people” and ultimately must held accountable for their crimes.

The humanitarian cost of the conflict will continue to rise until there is a viable peace agreement between the parties. But one thing is for sure: “The message from the women of South Sudan to their political leaders is very clear: end this war!” the SRSG said.

A lack of services for victims of sexual violence, reporting of this crime to security, judicial and social welfare actors because of government offices closures, malfunctioning police services and social stigma associated with sexual violence. All these factors contribute to a climate of impunity.

“The international community cannot leave survivors to fend for themselves. Now is the time to step up and help South Sudan put an end to these atrocities,” the Special Representative urged.

The newly signed agreement outlines critical priority areas for action including ensuring medical, psychosocial and legal assistance to victims; addressing impunity, security and justice sector reform, and ensuring that sexual violence crimes are explicitly addressed in the peace process and as an aspect of the Cessation of Hostilities Agreement.

The Special Representative also met with Riek Machar leader of the Sudan People’s Liberation Movement (Opposition) in Addis Ababa, Ethiopia, to discuss concrete measures that the opposition must take to prevent sexual violence by their forces and in areas under their control. 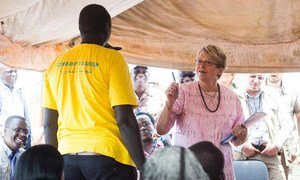 Amid a vast population of internally displaced persons (IDPs) and ongoing ethnic tensions, the challenges in South Sudan continue to remain “enormous,” the head of the United Nations mission in the African country acknowledged today.