IRIN/Ahmed Dalloul
Parts of Gaza have been decimated by Israeli strikes.
12 October 2014

Secretary-General Ban Ki-moon announced today that he will travel to Gaza on Tuesday to visit several sites destroyed during last summer's conflict, spotlighting the need to help the enclave “look ahead and build a better future” and advance reconstruction efforts.

Secretary-General Ban Ki-moon announced today that he will travel to Gaza on Tuesday to visit several sites destroyed during last summer's conflict, spotlighting the need to help the enclave "look ahead and build a better future” and advance reconstruction efforts.

“I believe it is important to be on the ground. That is why I am announcing today that I will visit Gaza on Tuesday to listen directly to the people of Gaza, survey the situation for myself,” Mr. Ban said as he briefed journalists in Cairo following an international conference on Gaza reconstruction.

Mr. Ban said that while he felt confident that today the international community clearly recognized the massive needs in Gaza, “this must be the last Gaza reconstruction conference”.

“Enough is enough,” Mr. Ban stressed, reiterating that the cycle of building and destroying must end. Donors may be fatigued – but the people of Gaza are bruised and bloody.

Scheduled to arrive in Gaza on Tuesday, according to the United Nations Relief Agency (UNRWA), the UN Chief will visit three sites including the UNRWA Compound, a United Nations Development Programme (UNDP) Fishing Project and the Jabalia school.

In addition to visiting Gaza, he will also go to an Israeli kibbutz that was hit by rockets from Gaza during the conflict.

During the recent 51-day conflict, dozens of schools, hospitals and clinics were destroyed or damaged in Gaza. UN facilities sheltering women and children were hit, resulting in many casualties. Eleven staff members of the UN were killed in the course of the conflict.

“Given that 70 percent of Gazans are refugees, we have a huge responsibility to rebuild homes and improve the situation in the refugee camps,” said UNRWA spokesperson Chris Gunness speaking with UN radio from Jerusalem this afternoon.

There are currently over 50,000 people in UNRWA shelters, one of which Mr. Ban is scheduled to visit when he arrives in the area on Tuesday. Mr. Gunness said. In addition to its emergency and reconstruction efforts, UNRWA is also running its regular operations including having opened schools for nearly a quarter of a million children.

Mr. Ban's visit comes at an “extremely significant” time, Mr. Gunness stated, adding that the people of Gaza have felt “isolated beyond the reach in a sense of diplomatic norms, international diplomacy, and international law”.

He said UNRWA was very encouraged with the results of today's Cairo Gaza conference particularly because so many donors made substantial pledges which it hoped would translate into real cash, Mr. Gunness said.

At the UNRWA compound, Mr. Ban is scheduled to meet with staff and Palestinian Ministers, followed by a visit to the Gaza Port where the Secretary-General will be briefed by fisherman on the effects of the restricted fishing zone imposed by Israel. Israel currently permits fishermen from Gaza use of six nautical miles of sea.

According to UNRWA, Gaza has 3,500 fishermen who support 35,000 people, typically from among the most disadvantaged and vulnerable of Palestinians.

UNDP is currently constructing 24 brick huts for 168 fishermen in Gaza Port to enable them to secure their fishing equipment. The brick huts allow fishermen to store their tools and also reduce their maintenance costs.

The Secretary-General has been travelling in North Africa and the Middle East this week, having already visited Tunisia and Libya along with today's stop in Egypt.

Briefing the press in Cairo on other aspects of his trip, Mr. Ban said the situation in Libya remains extremely fragile – with alarming implications for the wider region. Ending the violence and returning to dialogue is the only way to restore stability and build a better future for Libyans.

The Secretary-General also reiterated his concern over the situation in and around the Syrian city of Kobane. The continued attacks by ISIL or Daesh were putting thousands of lives are at stake. 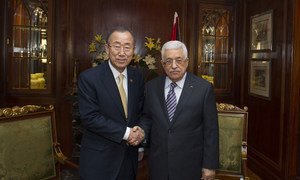 In Cairo, Ban urges parties to Gaza conflict to end ‘cycle of building and destroying’

On the next stop of his tour of North Africa, Secretary-General Ban Ki-moon in Egypt today at a conference on the reconstruction of Gaza urged all parties to last summer's war to address the root causes of the protracted conflict to prevent the “cycle of building and destroying” from becoming a ritual.