In Cairo, Ban urges parties to Gaza conflict to end ‘cycle of building and destroying’

On the next stop of his tour of North Africa, Secretary-General Ban Ki-moon in Egypt today at a conference on the reconstruction of Gaza urged all parties to last summer's war to address the root causes of the protracted conflict to prevent the “cycle of building and destroying” from becoming a ritual.

“We are here to stand with the people of Gaza who have endured a terrible summer of suffering,” said Mr. Ban in his remarks to the Cairo Conference on Gaza attended by the President of the State of Palestine, Mahmoud Abbas, and several foreign ministers including of Egypt, and Norway.

More than 2,100 Palestinians were killed in the recent 51-day conflict, along with more than 70 Israelis. Almost one-third of Gaza's population was uprooted from their homes and entire neighborhoods were flattened.

The Secretary –General recalled how in 2009, the international community gathered in Sharm el-Sheikh in the wake of another devastating war in Gaza.

“We pledged our support. We expressed our commitment. We resolved to rebuild. And yet here we are again. The cycle of building and destroying has continued– only worse,” said Mr. Ban.

This time around, dozens of schools, hospitals and clinics were destroyed or damaged. UN facilities sheltering women and children were hit, resulting in many casualties. Eleven staff members of the UN were killed in the course of the conflict.

Meanwhile rockets fired by Hamas and other armed groups from Gaza continued to be fired indiscriminately causing fear, panic and suffering, said Mr. Ban. Children of Gaza who have not yet reached grade three have already lived through three wars.

To effectively respond, the UN and partners in Palestine are working with the Palestinian Government to develop the “Gaza Crisis Appeal”. The “UN Support Plan for the Transformation of the Gaza Strip” amounts to about $2.1 billion for early recovery and reconstruction efforts.

But ultimately, the successful reconstruction of Gaza requires a strong political foundation, said Mr. Ban, adding that the comprehensive reconciliation agreement reached in Cairo on 25 September was a promising first step.

Mr. Ban pledged UN support for the Government of National Consensus as it manages Gaza's reconstruction needs and said he was encouraged by the recent historic Palestinian unity government meeting in Gaza led by Palestinian Prime Minister Rami Hamdallah.

Promoting an environment conducive for peace must include an investigation into potential violations of international humanitarian law by all parties to the conflict, Mr. Ban added.

It was equally important to make the most of the opportunity presented by the upcoming Cairo talks, strengthen the ceasefire to return to broader peace talks and refrain from unilateral actions which only exacerbate tensions and resentment.

“Gaza remains a tinderbox,” said Mr. Ban, reiterating the need to address the root causes of the recent hostilities: a restrictive occupation that has lasted almost half a century, the continued denial of Palestinian rights and the lack of tangible progress in peace negotiations.

All parties must come together to chart a clear course towards a just and final peace -- including achieving a full lifting of the blockade, ensuring Israel's legitimate security concerns; and establishing two States living side by side in peace and security.

“I do not want my successors or yours to make conferences such as this a ritual: building and destroying– and then expecting the international community to foot the bill,” the Secretary-General said. 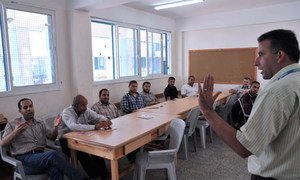 The United Nations agency assisting Palestinian refugees across the Middle East said today that it is training teachers in Gaza to provide psychosocial support to the 241,000 children back in schools in the area.