Ahead of International Day of the Girl Child, UN urges end to violence against women, girls

The United Nations has paid tribute to the almost one billion young and adolescent girls living around the world as many of them continue to face daily challenges to their development and overall diminished potential due to the enduring scourge of gender discrimination and violence.

“All over the world, an alarming number of adolescent girls are assaulted, beaten, raped, mutilated and even murdered,” Secretary-General Ban Ki-moon announced today in his message marking the third annual International Day of the Girl Child.

“The threat of violence at the hands of family members, partners, teachers and peers grossly violates their rights, diminishes their power and suppresses their potential,” continued Mr. Ban, who observed that adolescent girls, in particular, faced “multiple deprivations” such as unequal access to education, sexual and reproductive health services and social and economic resources.

“Girls are subjected to discriminatory social norms and harmful practices – such as female genital mutilation – that perpetuate a cycle of violence. A culture of impunity allows violence against adolescent girls to continue unabated,” he added.

The International Day of the Girl Child was designated as 11 October by a resolution adopted by the UN General Assembly in December 2011, to recognize girls' rights and highlight the unique challenges girls face worldwide. This year focuses on “empowering adolescent girls: ending the cycle of violence.”

As part of the Day's global observance, governments, the UN system, civil society, and public and private institutions are being called on to join forces and reaffirm their commitment to ending violence against adolescent girls and to promote their empowerment through a number of initiatives, including investing in adolescent girls to equip them with skills, confidence, and life options; making infrastructure, services, and technology accessible to girls and effective in meeting their needs for safety, connectivity and mobility; facilitating adolescent girls engagement in civic, economic and political life; continuing to advocate for making violence against girls and women visible and unacceptable both in private and public domains; and strengthening data, measurement and the evidence base in relation to the empowerment of and violence against adolescent girls.

The Secretary-General underlined the role his UNiTE to End Violence against Women campaign was playing in engaging a wide range of stakeholders and actors – from governments and civil society groups to the media and global citizenry – to raise awareness and increase political will and resources in the ongoing fight against violence against women and girls. He also drew attention to a parallel campaign known as HeForShe which motivates all men to become active participants in the continuing efforts for gender equality.

“As we define the post-2015 development framework and review progress achieved under the Beijing Declaration and Platform for Action, ending gender violence and promoting the empowerment of girls and women must be at the heart of our global agenda,” Mr. Ban declared.

The level of violence and abuse adolescent girls continue to face remains distressingly high, according to a new compilation of data issued by the UN Children's Fund (UNICEF). An estimated 70 million girls aged 15 to 19 report being victims of some form of physical violence while around 120 million girls under the age of 20 have experienced forced intercourse or other forced sexual acts. At the same time, 70 per cent of girls aged 15 to 19 who had been victims of physical or sexual violence never sought help as many said they did not think it was abuse or did not see a problem.

“These numbers speak to a mind-set that tolerates, perpetuates, and even justifies violence – and should sound an alarm to everyone, everywhere,” UNICEF Deputy Executive Director Geeta Rao Gupta stated in a press release following the announcement of the latest data.

“The problem is global but the solutions must be found at the national, community and family level. We have a responsibility to protect, educate, and empower adolescents. We are all accountable for ending violence against girls.”

Ms. Mlambo-Ngcuka warned that such widespread gender-based violence ultimately led to “a catastrophic loss of human potential” and recalled the promises made at the Beijing Declaration and Platform for Action – a forum convened in 1995 at which Member States hammered out commitments that were historic in scope.

“The promise made to girls at the Fourth World Conference on Women in Beijing must be delivered. Protecting girls from all forms of violence and promoting girls' empowerment must be at the heart of the global development agenda,” she stated.

The Executive Director announced that UN Women was in the process of rolling out a global youth-led programme that, she said, would help prevent violence against girls and young women and challenge gender stereotypes and norms that perpetuate violence.

“The International Day of the Girl Child is an opportunity to step up collective action to break the cycle of violence against girls and women. Empowering girls today makes for a safer, healthier, more prosperous and sustainable tomorrow.”

A group of independent UN human rights experts also issued a joint statement to mark the Day, as they urged Member States to bring their efforts against gender violence “to the next level” while “moving beyond awareness-raising to supporting adolescent girls as key actors in shaping the present and the future.”

The Prosecutor of the International Criminal Court (ICC), Fatou Bensouda, used the occasion of the Day to call for an end to violence against women and girls, emphasizing the need to confront the scourge with “unified resolve.”

“We cannot turn a blind eye to the suffering of girls subjected to terrifying forms of violence, including sexual and gender-based crimes, whether in armed conflict or otherwise,” she said. 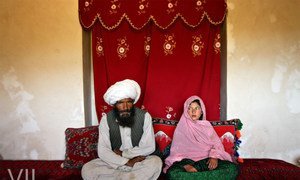 The United Nations today marked the first International Day of the Girl Child by calling for an end to child marriage, and stressing education as one of the best strategies for protecting girls against this harmful practice.