'We are late, but not too late to fight and win this battle,' against Ebola – UN

Declaring that the world has never seen anything like the current Ebola outbreak ravaging West Africa, senior United Nations officials today warned that the virus is “far ahead” of the global response as it is morphing from a local to an international crisis requiring all countries to scale up efforts and financial commitments to bring an end to the scourge.

Briefing the General Assembly on the situation on the ground, Anthony Banbury, head of the UN Mission for Ebola Emergency Response (UNMEER), via-video link from the operation's headquarters in Ghana warned that the crisis caused by the outbreak is severe and unprecedented.

“The world has never seen anything like it. Time is our enemy. The virus is far ahead of us,” he said, emphasizing that the outbreak is more than a health crisis as it is now impacting every level of society in the most-affected countries Guinea, Sierra Leone and Liberia – killing people, disrupting health systems, and derailing socioeconomic progress.

Joining Mr. Banbury in the briefing, which also included an update on the wider UN response, were the Deputy Secretary-General Jan Eliasson; Special Envoy of the Secretary-General on Ebola Dr. David Nabarro; and President of the General Assembly Sam Kutesa.

Mr. Banbury noted that traditional social and cultural practices in the affected countries are among the factors contributing to the spread of the virus. “Many people in the affected countries are still denying Ebola is real. We must understand and respect social mores and practices…while finding methods to combat the disease” that are acceptable at community levels, he said.

As for his initial assessment of the situation in the early days of UNMEER's roll-out, Mr. Banbury said: “The challenge is immense. We are late, but it is not too late to fight and win this battle. We are moving resources to where it is needed most. We will support national leadership and ownership. We shall play the role of 'crisis manager' not just 'response coordinator.' We shall fill gaps and support that which needs backstopping.”

But, he continued, UNMEER could not fight the battle alone; its contribution would need to be supported by an array of national and international partners. “To achieve results fast, we must have the world's support,” he said calling for strengthened treatment centres and diagnostic laboratories on the ground, scaled up financial support for aid agencies, and reliable arrangements in place to treat and if necessary evacuate workers treating the disease.

Mr. Banbury also said that even as the international community works hard to turn the tide on the outbreak “we need to be incorporating early recovery and long-term needs into the response.”

“The world must now act to help the people and governments of Sierra Leone, Guinea and Liberia. Failing to help will lead to unpredictable but very dire consequences for the people of the countries and well beyond. As long as there is once case of Ebola in any of these three countries, no country is safe,” he said calling for a broad global coalition to battle the spread of the virus. “We must rise to the occasion. We must defeat this disease.”

Deputy Secretary-General Jan Eliasson said that the Ebola outbreak was putting “hard-won development progress in jeopardy, neighbours are at risk and none of us are insulated from the threat posed by Ebola. No country, no organization can tackle Ebola alone,” he said, adding that the crisis requires collective mobilization inside and outside the affected countries.

The UN is on the ground with over 80 staff but many more will be needed to reach those areas where support is needed, especially at the local level. The Deputy Secretary-General appealed to Member States to act generously and swiftly, adding that a “contribution within days is much more important than a larger contribution within weeks.”

Closing borders or imposing travel bans will not isolate the disease but rather the affected countries and will prevent urgent aid from reaching those in need. More funds are needed as well as a surge in trained personnel who can deploy to Ebola Treatment Centres.

“Hospitals are overburdened and people are even worried to go to the hospitals. So you can imagine the number of people that are suffering and that are dying from other diseases – malaria, tuberculosis, all the things that you would normally treat,” Mr. Eliasson said.

In his briefing, Dr. David Nabarro, Special Envoy of the Secretary-General on Ebola, focused on the history of the current outbreak, its significance, the actions being undertaken to scale up response, as well as partnerships being built, national leadership, and the global coalition leading the combat against further spread of the virus.

“I've worked as a public health doctor for 35 years…but I have never encountered a public health crisis like this in my life,” he said, explaining that this is because the Ebola virus had spread from isolated areas and through major urban areas and regions.

He warned that without the mass mobilization of the international community to support the affected countries in West Africa, “it will be impossible to get this disease quickly under control, and the world will have to live with the Ebola virus forever.”

So, while the disease is now spreading faster than efforts to contain it, “we know what needs to be done and we are going to do it before this virus can cause more death and misery.”

President of the General Assembly, Sam Kutesa said that despite the heroic efforts of doctors and nurses, the epidemic continues to ravage communities, with the death toll rising with each passing day.

There are grave concerns also that the outbreak could quickly spread from a regional to an international crisis, Mr. Kutesa said, adding that “Ebola is a threat that can easily land at any nation's doorstep.”

“In a situation where each day potentially means more lives lost, the rapid response of UNMEER supports the implementation of critical prevention and containment measures,” he said.

Much more needs to be done, starting with UN Member States redoubling their efforts and following through on their financial pledges. Given the unprecedented nature of the epidemic, the international community must work together to come up with innovative solutions to contain the further spread of Ebola, declared the Assembly President. 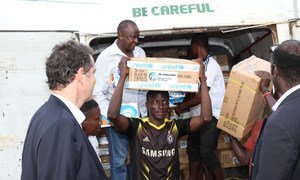 The international community must “step up” its response to the Ebola outbreak in West Africa before it gets much worse, United Nations Secretary-General Ban Ki-moon stressed today , adding that a range of measures – from extra financing to increased medical assistance – were essential in helping the countries afflicted by the disease.