A woman poses in front of a graffiti representing the sun on the occasion of the observance of the World Mental Health Day. UN/M. Perret
10 October 2014

Suffering from schizophrenia should not have to mean enduring “a life sentence of isolation and poor physical health,” Secretary-General Ban Ki-moon said today as he urged the creation of better support networks and services for people living with the mental health disorder.

“Schizophrenia is treatable,” affirmed Mr. Ban in his message marking the 2014 observance of World Mental Health Day, the theme of which is Living with schizophrenia.

“Appropriate mental and physical health care, along with regular monitoring and psychological and social support can make a profound difference,” he added.

The Secretary-General noted that among the estimated 21 million people around the world suffering from schizophrenia, many reside in places devoid of sufficient health and social services and, as a result, are frequently pushed to the margins of society, leaving them homeless and unemployed.

In addition, he said, people with severe mental illnesses such as schizophrenia also die on average between 10 and 25 years earlier than the general population due to unhealthy lifestyle habits such as smoking, harmful use of alcohol, poor diet and lack of regular exercise.

According to the World Health Organization, the UN agency tasked with organizing the Day, schizophrenia is a disorder which, although severe and characterized by profound disruptions in thinking, can be treated, allowing people affected by it to lead productive lives and be integrated in society.

Mr. Ban underscored the importance of assisting those with schizophrenia with expanded support networks for patients and carers but also urged all people suffering from the disorder to implement wholesale lifestyle changes by going for regular health checks and seeking advice for healthy living.

“Today, we can provide dignity and hope to all those suffering from schizophrenia and other severe mental illness,” the Secretary-General’s message concluded. 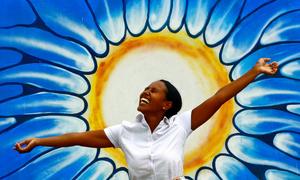 Secretary-General Ban Ki-moon today urged the world to allocate more resources for the treatment of mental disorders, saying that too little funding was devoted to mental health despite the debilitating nature of the illnesses and the fact they can be prevented or treated effectively.