The top United Nations official in the Central African Republic (CAR) today condemned a deadly ambush against peacekeepers serving there that left one “blue helmet” dead, one severely wounded and seven others slightly injured.

According to reports, a UN Multidimensional Integrated Stabilization Mission in CAR (MINUSCA) convoy was attacked on the outskirts of Bangui, CAR’s capital, in the evening hours of 9 October, in the latest bout of violence to ripple through the war-torn country.

The Secretary-General’s Special Representative and head of MINUSCA, Babacar Gaye, strongly condemned the attack in a statement, calling it an “unacceptable” crime and vowing to bring the perpetrators to justice.

“The United Nations is a non-partisan Organization, and we will work with all actors to fulfil our aims, to promote peace and reconciliation in the Central African Republic,” he declared.

“But we will continue to take robust action against criminal elements who threaten civilians.”

Lieutenant General Gaye also paid tribute to MINUSCA’s military and police units, who, he said, were “preventing a very difficult situation from spiralling out of control” and expressed his deepest condolences to the family of the fallen peacekeeper and his Government. 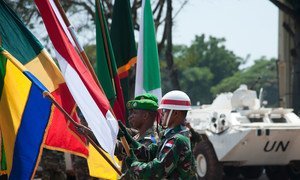