Urgent support is needed to avert an “economic meltdown” in Guinea, where the Ebola crisis is destroying lives, jobs and essential services, leaving exports of fruits and vegetables down 90 percent, the airport two-thirds empty and container traffic to its key port down by a third, according to the United Nations.

“The health crisis in Guinea, one of the three most seriously affected countries, now permeates every aspect of people’s lives,” said Magdy Martínez-Solimán, Director of Policy at the United Nations Development Programme (UNDP).

He said that while Ebola is crippling health services, it is also shutting down businesses, disrupting the production, sale and export of essential foodstuffs, and affecting schooling at all levels.

“We can avoid a paralysis if we act now to make sure years of development efforts are not wiped out,” he added, concluding his official visit to the capital, Conakry.

He said the Ebola crisis in West Africa has already affected every sector of the economy and could be felt 10 years after the crisis has ended.

After prolonged political instability, economic growth in Guinea had picked up. The country was beginning to forge ahead in its efforts to fight poverty and create a better future for Guinean women and men.

But now container traffic in the port of Conakry is down by a third, while the airport is two-thirds empty. In the Northeast, exports of fruit and vegetables to neighbouring countries have been down 90 percent, according to a UNDP press release.

The agricultural and mining sectors have also been hit hard. Fewer farmers are tending the fields, threatening to reduce food yields in the harvesting period, while mining companies have asked workers to stay home.

Mr. Martínez-Solimán is on a 10-day visit to the three most-affected countries, together with Ruby Sandhu-Rojon, UNDP’s Deputy Director for Africa. The trip will include site visits to Ebola treatment centres and UNDP project sites as well as meetings with Government authorities and other agencies and institutions involved in halting the spread of the disease.

UNDP said it will collaborate closely with the new UN Mission for Ebola Emergency Response (UNMEER) and will work at the global level as part of the wider UN response to mobilize funds and additional support to combat the epidemic and its consequences. 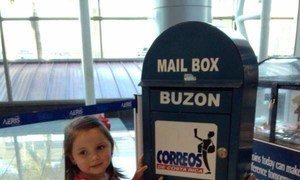 With more than 600,000 postal offices around the world and an increasing reliance on services beyond physical mail, on World Post Day, senior United Nations officials urged Governments to support postal reform and modernization to ensure that services are evolving to meet customers’ needs.