Food markets are more stable and prices for most agricultural commodities are sharply lower than they have been in recent years, according to the latest edition of the biannual Food Outlook report released today by the United Nations Food and Agriculture Organization (FAO).

According to a statement released by the Rome-based FAO, bumper harvests and abundant stockpiles are key factors helping drive down international food prices.

Global output of oilseeds is also forecast to exceed last season's record due to further expansion of soybean production. Meanwhile, world production of cassava – a staple crop for millions – looks to be on track to achieving another record high, driven by sustained growth in Africa.

Meat production is set to grow moderately, but not enough to ease prices from their current high levels, while milk production continues to grow steadily in many countries. Production of fish is also on the rise, driven largely by aquaculture and less-than-expected El Niño impacts.

The FAO Food Price Index (FPI) for September, also released today, registered its sixth consecutive monthly drop – the longest period of continuous decline in the value of the index since the late 1990s – averaging 191.5 points in September 2014.

The FPI is a trade-weighted index that measures prices of five major food commodities on international markets.

In September it found that, sugar and dairy fell most sharply, followed by cereals and oils, while meat prices remained steady. Meat prices are at a historic high, but registered only a slight increase over August (0.3 of a point) after months of steady hikes.

High meat prices as well as large trade volumes for products in the animal protein category, including meat, dairy and fish, mean that countries importing foodstuffs will surpass $1 trillion again this year, for the fifth year in a row.

It says that the Ebola virus disease outbreak in Guinea, Liberia and Sierra Leone has disrupted markets, farming activities and livelihoods, seriously affecting the food security of large numbers of people. And irregular rains in the Sahel belt will result in mixed production prospects.

While crop production in the Central African Republic is up from 2013, it still remains well below average due to the impact of widespread civil insecurity. And food prices in Somalia and the Sudan are at a record high.

Drought conditions in Central America have reduced harvest in key producing countries. Drought has also been a problem in the Near East, leading to a below-average cereal harvest for the region, while the conflicts in Syria and Iraq continue to degrade food security. 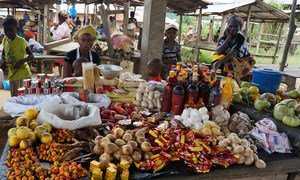 The United Nations Food and Agriculture Organization (FAO) today is launching a programme that will assist 90,000 vulnerable households in Guinea, Liberia and Sierra Leone, as Secretary-General Ban Ki-moon separately announced the appointment of the respective UN Crisis Managers in the three countries hardest hit by the Ebola outbreak in West Africa.