FAO Liberia
Goods for sale at Kolahun City market in Lofa County, Liberia, a region hard-hit by the Ebola virus which wiped out entire families in some communities.
8 October 2014

The United Nations Food and Agriculture Organization (FAO) today is launching a programme that will assist 90,000 vulnerable households in Guinea, Liberia and Sierra Leone, as Secretary-General Ban Ki-moon separately announced the appointment of the respective UN Crisis Managers in the three countries hardest hit by the Ebola outbreak in West Africa.

“Our comprehensive response is part of overall United Nations efforts to save lives and protect livelihoods,” said Vincent Martin, Head of FAO’s Dakar-based Subregional Resilience Hub, the office coordinating the response for the countries, whose food supply and livelihoods are threatened by the disruptive effect of the Ebola epidemic on rural economies, agricultural activities and markets.

Early results from rapid assessments point to a worrisome situation. In Sierra Leone, for example, 47 per cent of the respondents said Ebola was considerably disruption their farming activities. In Lofa county, rural Liberia’s most affected area, the process of commodities, including food, increased from 30 to 75 per cent just in August 2014.

If not addressed now, the current impact of the outbreak on the livelihoods could lead to long-lasting impacts on farmers’ livelihoods and rural economies, FAO warns.

As the United Nations continues to ramp up its response response to the unprecedented outbreak, the UN World Food Programme (WFP) says that it requires $179.6 million for its global Ebola emergency operations until February 2015. Only $48 million so far have been received.

Besides assistance to meet the basic food needs of over 1 million people in Guinea, Liberia and Sierra Leone, WFP is providing transport and logistics support in the fight against the outbreak. In Liberia, the Logistics Cluster, through WFP, is building four Ebola treatment centres and has set up a dedicated storage hub for the humanitarian community.

Meanwhile, the Head of the UN Mission in Liberia (UNMIL), Karin Landgren, announced today that an international staff member has tested positive for Ebola. This is the second case of Ebola within the mission. An earlier probable case resulted in the death of a staff member on 25 September.

Ms. Landgren says UNMIL has taken all necessary measures to prevent any possible further transmission within or outside the mission.

In line with World Health Organization (WHO) protocols, the UNMIL medical team has conducted immediate and robust contact tracing to ensure all people that came into contact with both staff members while they were symptomatic are assessed and quarantined.

The appointments are part of the United Nations Mission for Ebola Emergency Response (UNMEER). In their respective roles, the Crisis Managers will work with their host Government along with other partners to ensure a rapid international response to the Ebola crisis. 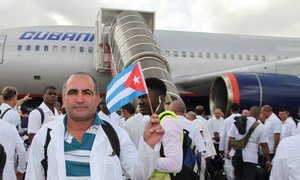 As the head of the United Nations mission working to stop the Ebola outbreak continued his visit to hard-hit countries in West Africa today, the world body’s humanitarian wing said funding for the international response is lagging, with only 26 per cent of the $988 million needed having been received thus far.