This figure reflects the economic loss for industries linked to coral reefs alone, which are some of the most vulnerable species to this phenomenon. The overall financial and environmental costs are still uncertain, states the report, An Updated Synthesis of the Impacts of Ocean Acidification on Marine Biodiversity, issued in Pyeongchang by the Convention on Biological Diversity (CBD) at the 12th meeting of the Conference of the Parties to the CBD (COP-12).

“When ecosystems stop delivering the way they should, they essentially deliver less services and less benefits. In the case of coral reefs, those systems are essential for people’s livelihoods in many regions of the world and they will be significantly affected,” said Salvatore Arico, who acts as the principal focal point on biodiversity and policy at the UN Educational, Scientific and Cultural Organization (UNESCO).

Ocean acidification is the ongoing decrease in the pH of the Earth’s oceans, caused by a drastic increase in carbon dioxide emissions due to human activity. The report stresses that this phenomenon is occurring at unprecedented levels, threatening marine biodiversity and ultimately human society.

Higher acidity makes it harder for marine organisms like corals to calcify their shells and skeletons, which disturbs the balance of the entire ecosystem. For example, pteropods, which act as the “potato chips of the sea” because lots of organisms feed on them, are important in lots of food webs, but are severely threatened by ocean acidification.

The report, which was put together by a team of 30 international experts led by UK scientists, finds that ocean acidification has increased by around 26 per cent since pre-industrial times, and will continue to increase in the next 50 to 100 years, drastically affecting marine organisms and ecosystems as well as the goods and services they provide.

“While $1 trillion may sound like a huge figure, but we need to consider the benefits derived from marine biodiversity to many major industries,” Mr. Arico said in an interview. “Ocean acidification will greatly affect food security in the coming years, as well as tourism and other industries such as the pharmaceutical industry which relies on many marine organisms.”

While reversing ocean acidification is impossible at this stage, it is still possible to reduce the rate of CO2 emissions and eventually halt them.

“The main challenge is to link the current knowledge on ocean acidification with the post-Kyoto negotiations on climate change,” Mr. Arico said, referring to the negotiations to be held by the UN Framework Convention on Climate Change (UNFCCC) in Lima, Peru later this year, and in Paris, France, in 2015. “It would be really very useful if ocean acidification be taken into account in the context of these negotiations because it would inform the ultimate decisions by governments.” 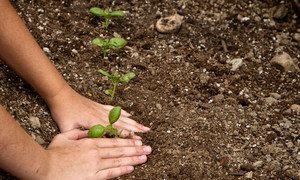 The parties to the Convention on Biological Diversity began meeting today as a new United Nations report on the status of biodiversity warned that much more efficient use of land, water, energy and materials are needed to meet globally-agreed targets by 2020.