With eyes fixed on 2015, General Assembly takes up annual report on UN’s work

The United Nations General Assembly today discussed Secretary-General Ban Ki-moon’s report on the work of the Organization, which covers a range of issues and calls for renewed efforts to address peace and security challenges and to encourage development aspirations.

“While we can take satisfaction that millions of people have been lifted out of extreme poverty, too many more continue to suffer from privation, insecurity and inequality,” Mr. Ban said in the introduction to his report. “This is unacceptable in a world in which opportunities and wealth abound and in which technology has empowered us and shrunk the distances between us.”

The report comes as the General Assembly steps up efforts to assess progress in reaching the anti-poverty targets known as the Millennium Development Goals (MDGs) by the 2015 deadline, and to define a new sustainable development agenda beyond that date. In addition, 2015 is the year in which governments will agree on a universal climate change agreement to follow up on the Kyoto Protocol.

In the area of peace and security, he noted that “we face today a heightened level and new types of security threat, requiring new approaches and strategies.”

The role of the UN partners, particularly in regional and sub-regional organizations, remain critical, particularly to countries in Africa, land locked developing countries and other States with special needs, he added.

The outbreak of Ebola, Mr. Kutesa said, is a reminder of the need the counter the huge deficits that still exist in regard to health and education systems, as well as energy and infrastructure in many developing countries with special circumstances.

In his report, Mr. Ban said that events across the globe in the past year testified to the need for human rights to be integral to all that the UN does. He also highlighted the role that the UN has in promoting accountability for serious crimes and in advocating for the universal ratification of the Rome Statute of the International Criminal Court (ICC).

On administrative matters, Mr. Ban added: “My management reform efforts aim to strengthen the Organization and enable it to deliver its mandates more effectively while ensuring the proper stewardship of resources, by improving administrative support, resource management, accountability and transparency.” 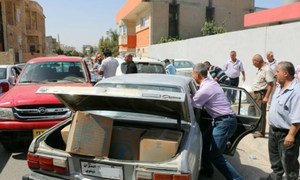 Despite insecurity and the continuous movement of people, the United Nations said today it has reached more than one million people uprooted by violence across Iraq with food assistance, while also noting a sharp increase in refugees fleeing into neighbouring Jordan and Turkey.